Do you have any trouble? Can I borrow it?

During a discussion of moving our toddlers to big beds, one of my playgroup moms mentioned that she tends to worry about these things far in advance of their actually happening. For example, she had already thought of about twenty-five ways the switch to the big-girl bed could go horribly awry, and her daughter was only about fifteen months old at the time. In other words, many months away from a big-girl bed. She said her husband, on the other hand, waits until things actually become a problem before he tries to fix them. I know! Crazy!

Having children has both increased and decreased my own propensity for borrowing trouble. As the mother of only one baby, I was quite good manufacturing possible problems that might arrive one day, particularly in regards to sleep. "I rock him to sleep! HOW WILL I EVER STOP?" or "He uses a bink! NOW HE WILL NEVER STOP!" or "We finally have a good bedtime routine! HOW WILL WE EVER MANAGE TWO CHILDREN?" You should note that I was not actually even pregnant when I worried about that last one.

But now I have two children, so I've gotten over a lot of those worries, because I have living, breathing proof that I will not always have to rock him to sleep and he will still go to bed even when there is a small interloper intruding on his personal space. (You might argue that my lap is MY personal space, but I'm a mom, so... no.) Technically, we're still working on the bink, but I think we're going to have to go cold turkey with that one after Christmas. I choose not to think about it right now.

However! I am still quite capable of imagining the insurmountable problems of having more than two kids. Would you care to join me on my particular train wreck of thought?

"Nora is almost six months old, and her bedtime routine still revolves around nursing and rocking. What are we going to do if we have to let her cry it out? She shares a room with Jack! And there are no more bedrooms! So where are we going to put MORE kids? And where will we keep their stuff? What if we have to move? And what if we decide to move when I'm pregnant? How will I ever take care of two kids while I'm pregnant? OMG THE HOUSE IS A MESS HOW WILL I MAINTAIN OPEN-HOUSE LEVELS OF ORDER WHILE PREGNANT WITH TWO KIDS? AUUUUGGGGHHHHHH!!!!"

Yes, I can successfully work myself into a state of high anxiety about getting ready for an open house that may or may not happen at some point in the distant future in the midst of a pregnancy that may never happen. I'm worried about how I will clean THIS mess right now such that the house will be ready to show in THREE YEARS OR MORE. What's that you say? The house will be cleaned and messed up about four thousand times by then? Oh, and Nora will not always require a bouncy seat and exersaucer and high chair and changing table? And she'll even probably be able to play on her own in three years? YOUR LOGIC WILL NOT WORK ON ME.

I have to admit, I'm also wondering how I will ever be able to manage more than two kids, and this makes me sad, because I'm pretty sure I want more than two kids. I'm the youngest of six, and while I always enjoyed people's shock at learning about what a large family I had, I never thought it was that big of a deal. Looking back, I now wonder how my mother ever even left the house. It seemed so effortless to me! Well, it WAS effortless. For me. But my poor mother! My sister had a similar thought recently after a morning of hosting most of the under-seven set of grandchildren at her house. They weren't being bad or anything, just being kids, but six small children behaving well are still pretty darn loud. "I'm surprised you still like us," my sister said to my mother that afternoon, because my mother had to deal with that level of chaos EVERY SINGLE DAY.

I think I'm stuck in the same loop that Swistle talks about here. I have gone back to this post of Swistle's many times, in fact, because it is reassuring to me that she had the same "I-can't-possibly-have-more-than-two" thoughts that I am having. And now she has five! And she is surviving!

So. I will continue to try to talk myself down from the ledge in regards to the hypothetical open house we are going to have in three years. I am going to stop trying to solve problems before they exist.

And now the baby is waking up, so I am excused from having to come up with a coherent ending to this story. Yay!
Posted by Dr. Maureen at 9:19 AM 4 comments:

Things I've been wanting to tell you

I have about fifty billion post ideas bouncing around in my head, but every time I sit down to write them the ideas VANISH. INTO THIN AIR. I know, for example, that I wanted to tell you about nursing. I wanted to say that sometimes, when she is nursing, Nora’s hand wanders gently over my arm, giving me soft little baby strokes that feel – oh! So nice. But then she takes a big ol’ fistful of arm flesh and holds on really tightly with her tiny little dagger fingernails. Sort of ruins the moment. Seriously, HOW do her fingernails stay so sharp? Sometimes it feels like I do nothing but trim those fingernails, but to no avail. They are always, ALWAYS insanely sharp.

I wanted to tell you that I went to my first ever parent-teacher conference fully expecting to be disappointed, and I was. Not because I got a bad report, but because Miss Sara inexplicably failed to describe Jack as the most intelligent, most delightful, and most all-around extraordinary child she’s ever had the pleasure of working with. I know, right? All she said was that he’s very bright, plays well with others, and doesn’t run with scissors. Also, she said he seems to enjoy doing his work, and I couldn’t help but smile inwardly at the idea of calling what those kids do “work.” They’re basically coloring and tracing. But it’s having an effect, because, with guidance, the kid can now write letters that are recognizable to the general public. People say that the first year of a child’s life is the most fraught with changes, and I guess that’s true, but, boy, Jack sure is a changed man compared to this time last year. Heck, he’s changed enormously since September!

And I wanted to tell you how Nora is an easy, happy, smiley baby, but when she’s bored she makes the worst screechy screamy sound that you have ever heard. She’s not upset when she makes it, just entertaining herself. When I hear it, I want to say, “Nora! What a delightful SOUND you’ve discovered!” a la Han Solo commenting on the smell Princess Leia discovered in the Death Star’s garbage masher. When Jack hears it, he covers his ears and says, “Mommy, I don’t want her to make that sound.” You and me both, kid, you and me both.

Oh, and hey! I decided to quit my job. Well, one of my jobs, the one that I claim to work at two days a week in my shamefully out-of-date “About” tab. I used to work there two days a week, but then I cut back to an as-needed consultancy, and they haven’t needed me since April. So when I got an email asking me if I wanted to keep doing it I thought, “Um… no!” and I quit. Fortunately, my other job, the one I actually do stuff for (the one I’m supposed to be doing stuff for RIGHT THIS SECOND, in fact), is still going strong.

So speaking of that job thing…
Posted by Dr. Maureen at 8:13 PM 1 comment:

Email ThisBlogThis!Share to TwitterShare to FacebookShare to Pinterest
Labels: Jack, Me, Nora

A word about Nora

It seems that most of the posts I’ve been writing here have been about Jack. This is easy to understand; there are just more stories about Jack because, frankly, babies are a bit… dull. Not to LIVE with, mind you, but to write about. At least, they SOUND boring if I write about them, especially when I have this wealth of preschooler stories from which to choose. Nora cannot, for example, have the following conversation with me:

Read more at The Bump!

Edited to add: I actually wrote this about two weeks ago. I'm telling you because I don't want you to think I am well-rested today because today I am SICK and Nora was up for HOURS and wah. So I want sympathy, not misplaced congratulations. :)
Posted by Dr. Maureen at 7:59 AM 1 comment:

A few weeks ago, Liz posted some pictures of her baby in what is just about the cutest hat I’ve ever seen. I left her a comment stating as much and then do you know what happened? 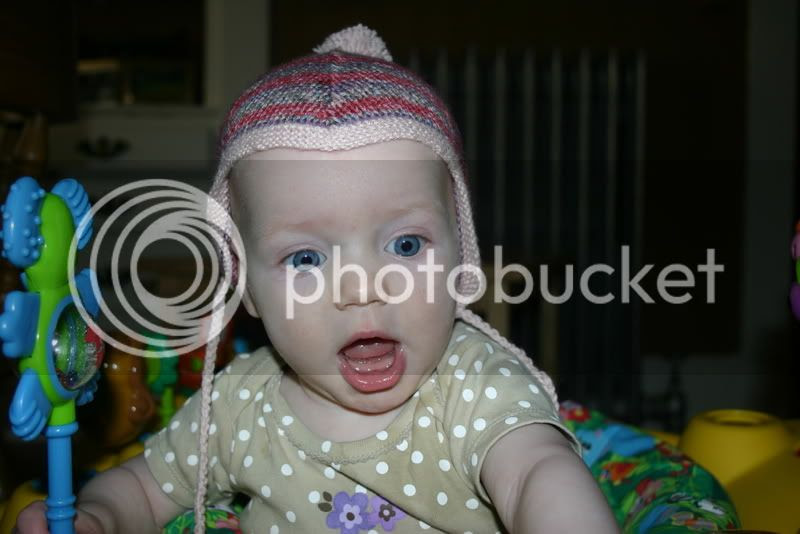 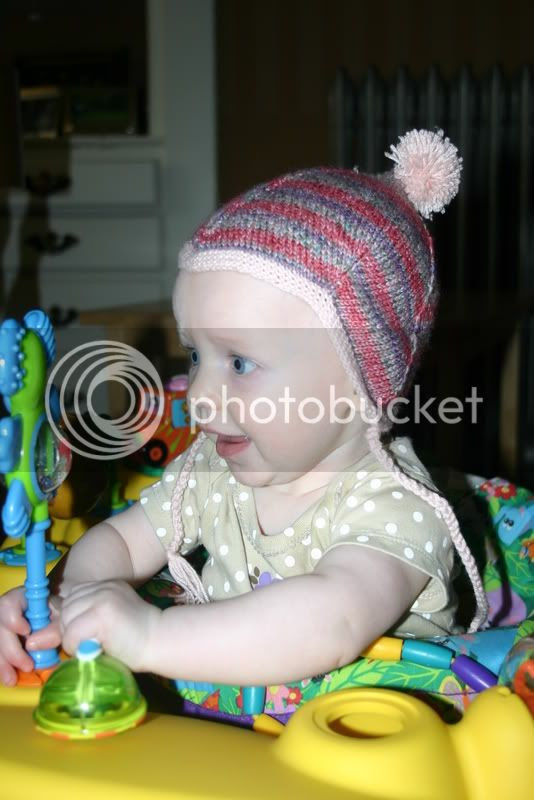 Yes! She sent me one of my very own! Or of Nora’s very own, anyway. It seems Liz had made a small hat as a prototype, and was happy to find a small baby to send it to. I think the hat may be a squidge too small for Nora, but I don’t care because I love it so much.

People who knit astound me. I am astounded. They take two sticks and some string and wave them around and make CLOTHES. It’s like a miracle. Or magic, even, what with the waving around of sticks and all.

Liz! Are you a magician?

And now, to make up for the non-photogenic be-hatted baby up there, may I present you with our Christmas card outtakes? It's funniest if you flip through them fast so it looks like they're moving. 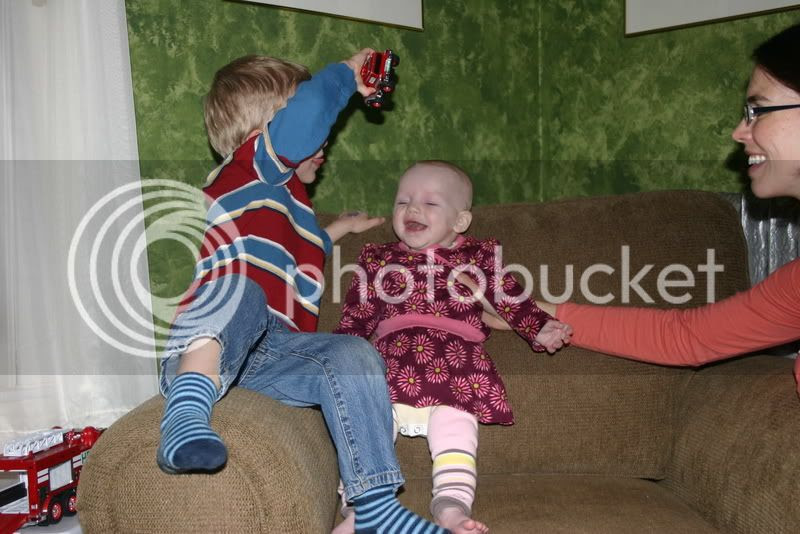 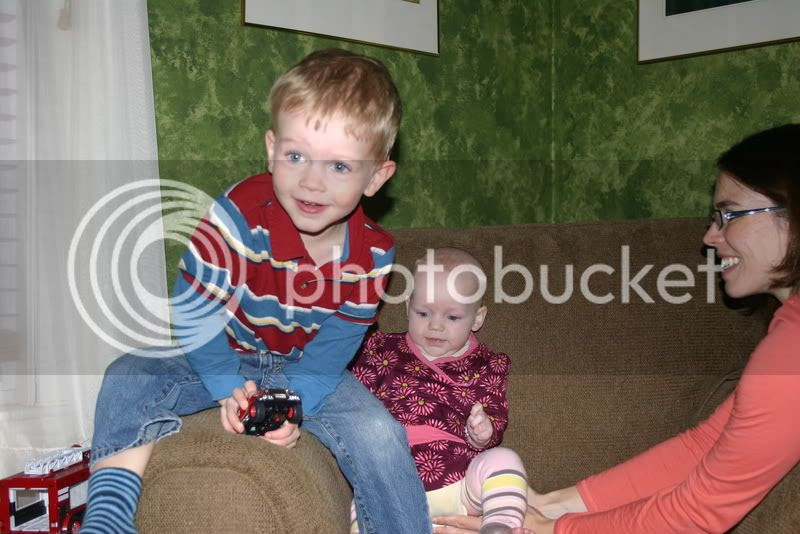 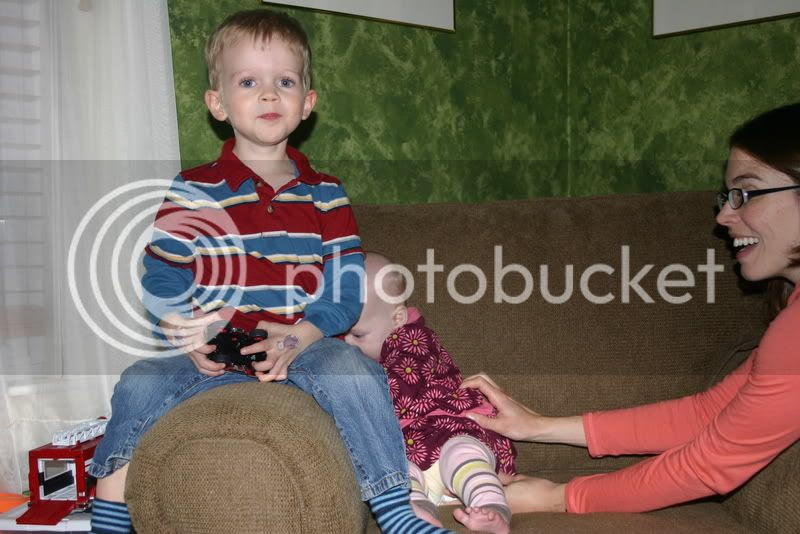 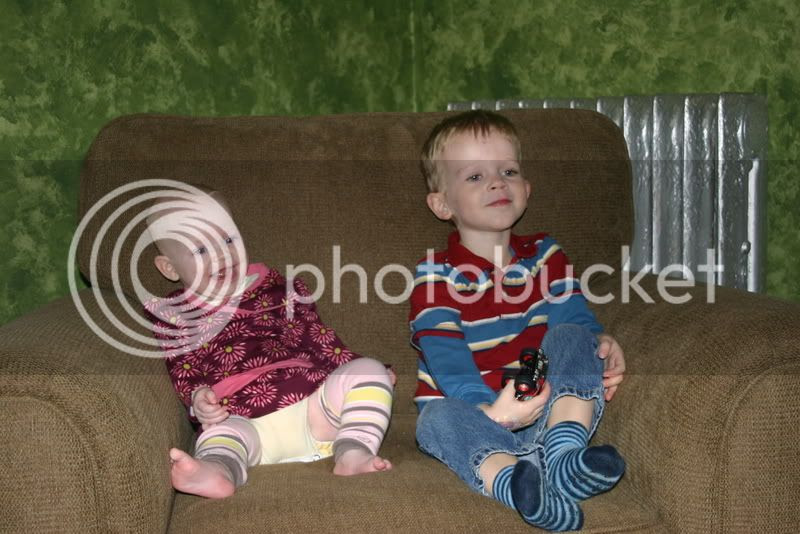 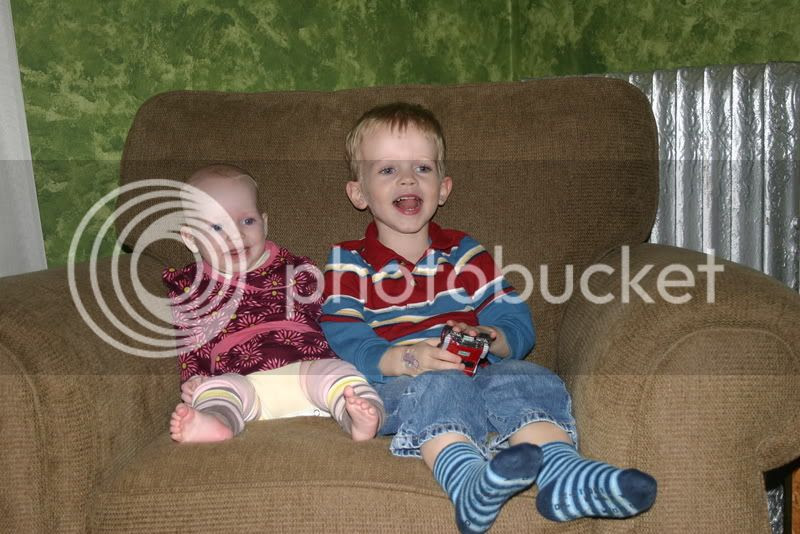 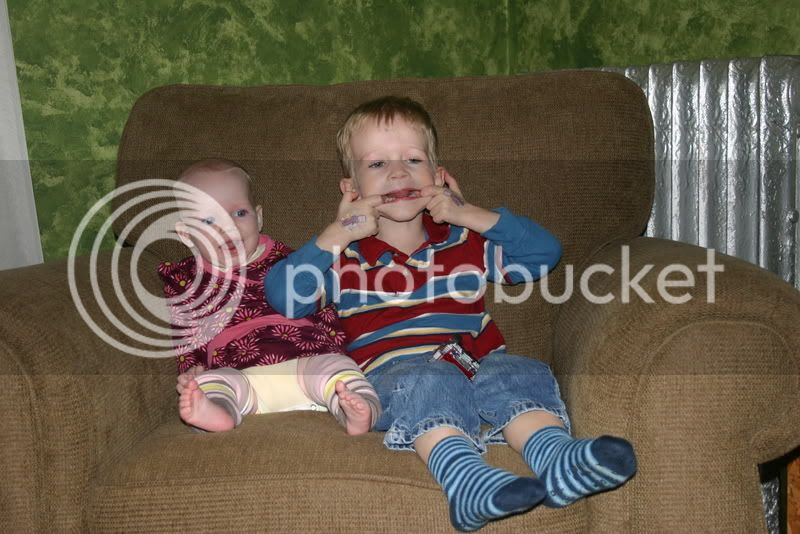 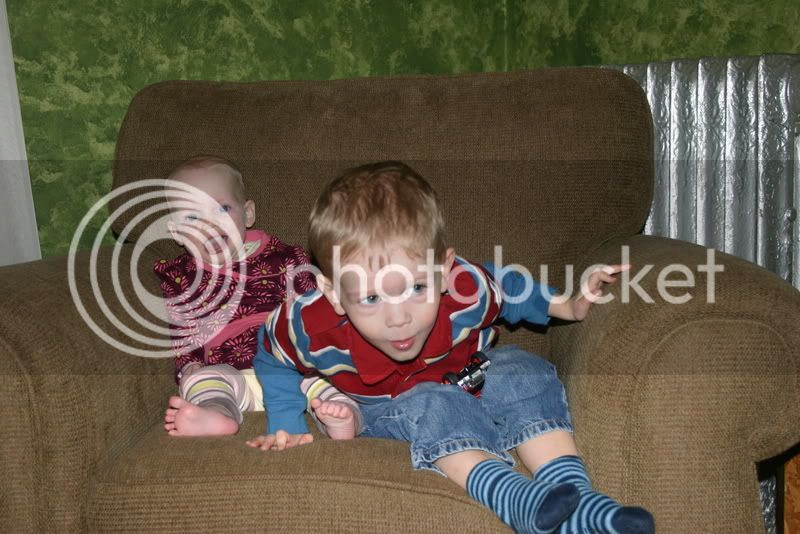 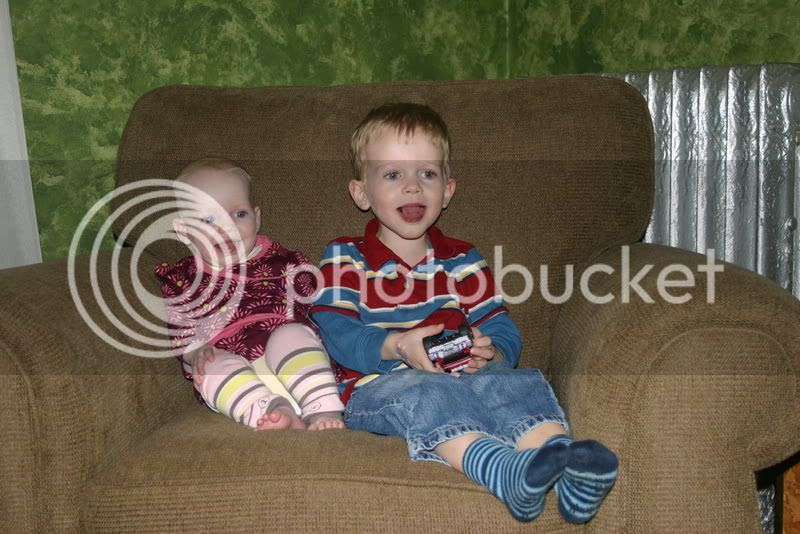 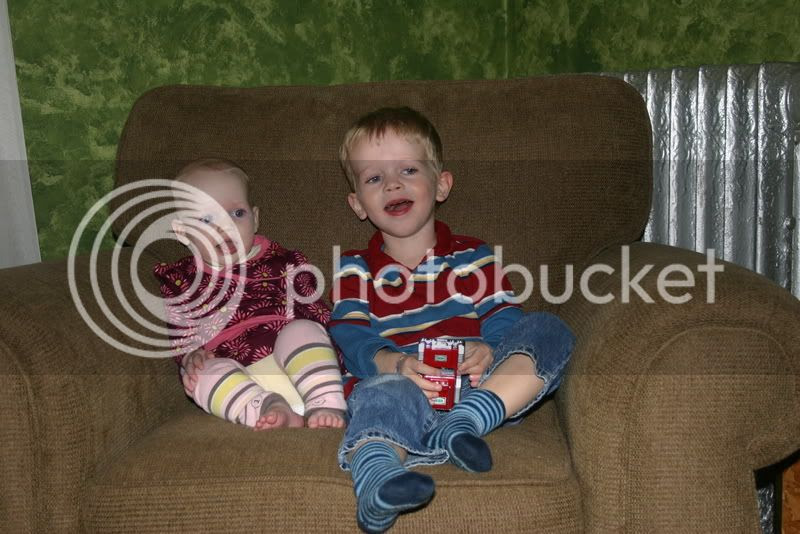 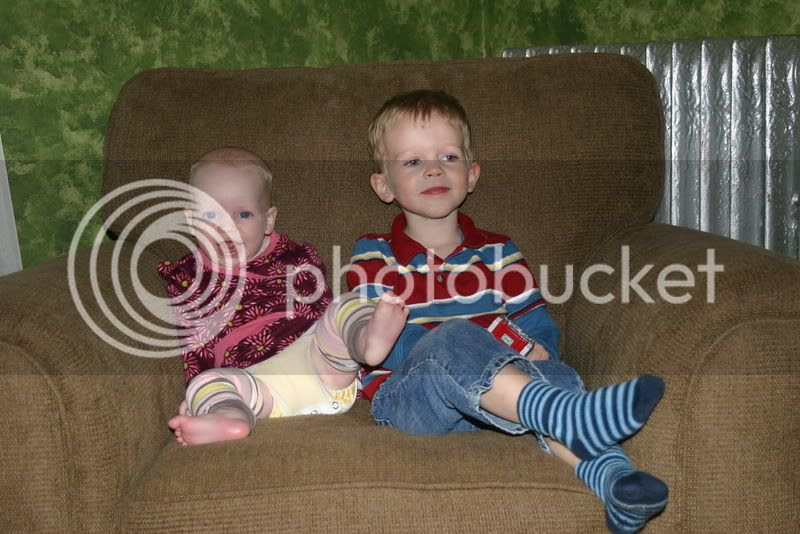 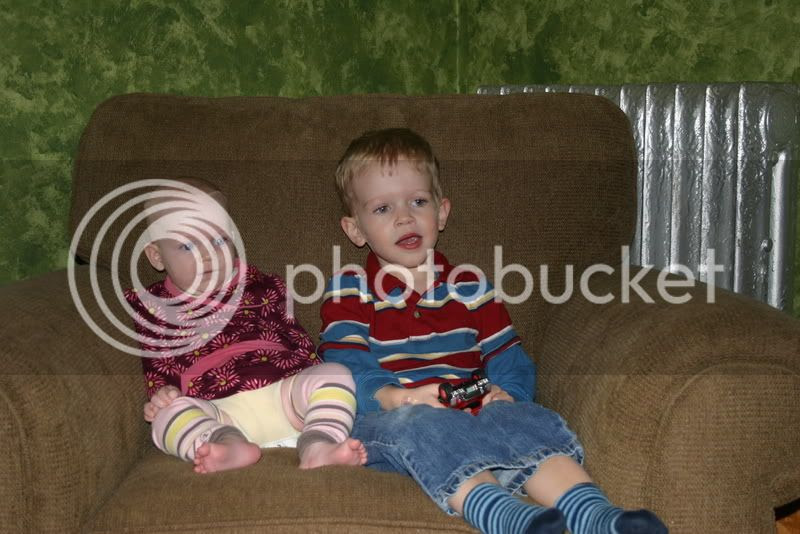 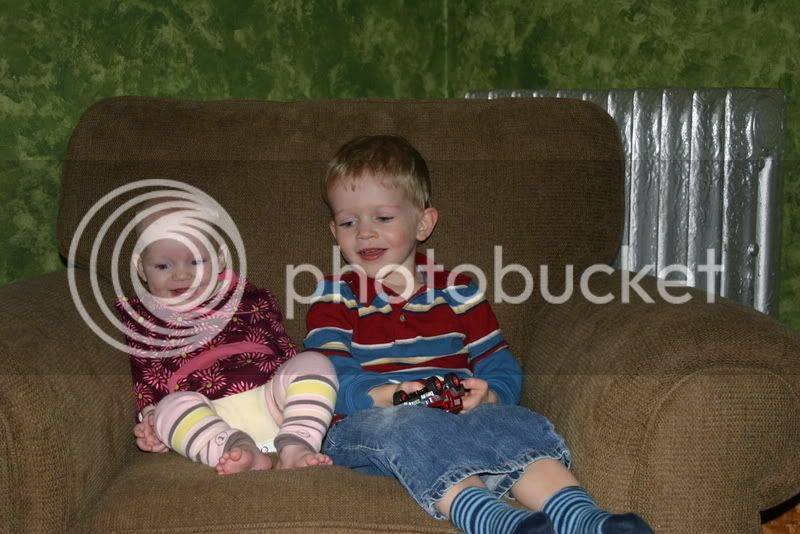 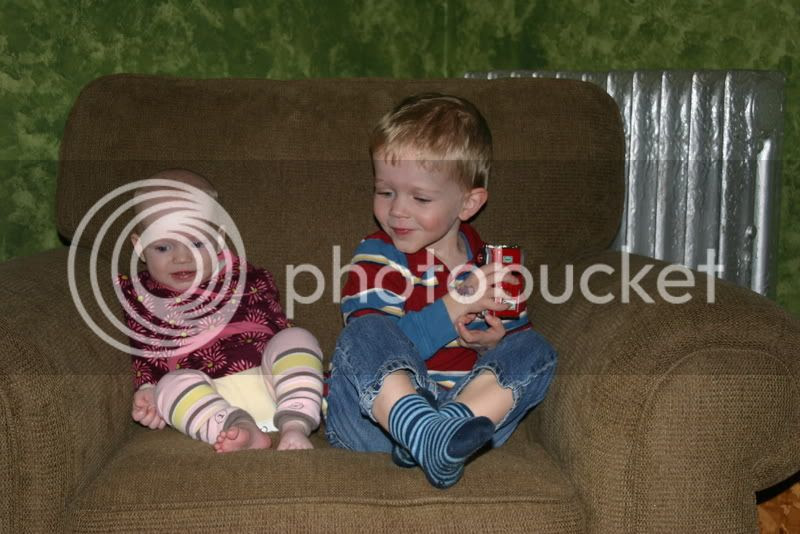 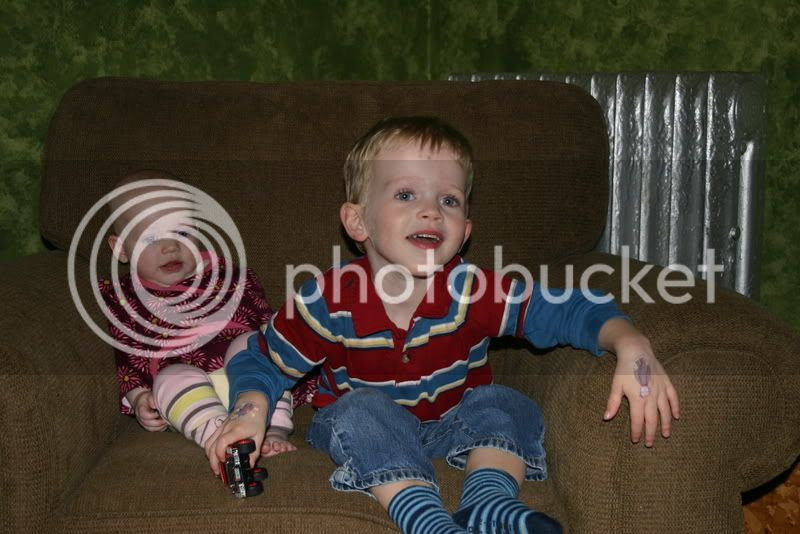