When Jack was born, I took the advice of my wiser and more experienced older sisters and went right ahead and gave him a pacifier so I could get twenty minutes of solo sleep, nipple confusion be damned. And boy howdy, that bink was a godsend at times. I used to feel sympathy for one of my sisters whose kids never took a pacifier because the bink was a large part of the reason he slept through the night when he did. “I’ll take it away when it becomes a problem,” I thought.

It's right there, on the wall

Nora loves to play "Where's the clock?" But... she's not very good at it. I pretty much always have to tell her where it is.

Where's the clock? from Maureen on Vimeo.

But she's definitely trying to say "clock" there at the end, right? You see that too, right?

In addition to being a language prodigy, Nora is developing a knack for problem solving. I set up to record her technique for eating slippery banana slices and as a bonus, got Jack on tape reading me a story. It's his own interpretation of one of those books that are just pictures of things. This one has picture of things that are farm-related. There are no wolves in it, but there are vegetables.

Jack reads a book while Nora eats a banana from Maureen on Vimeo.

We don't actually have a lake 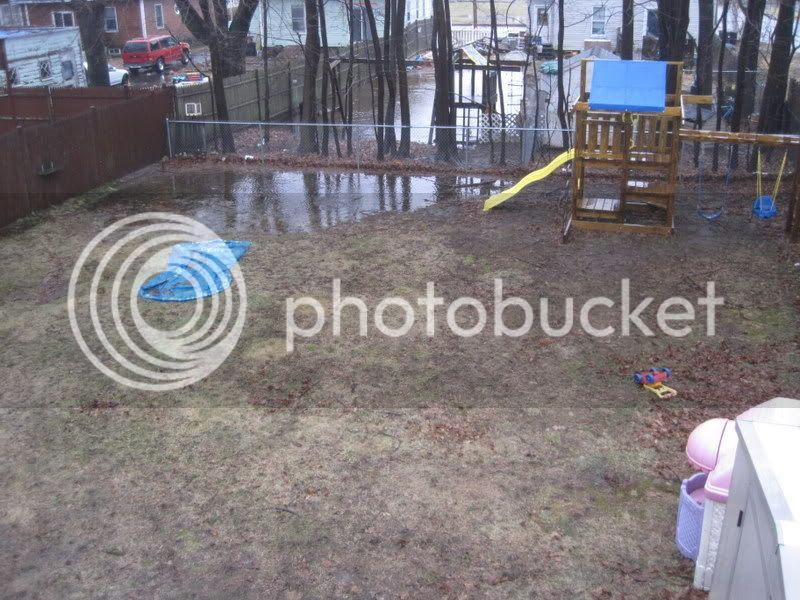 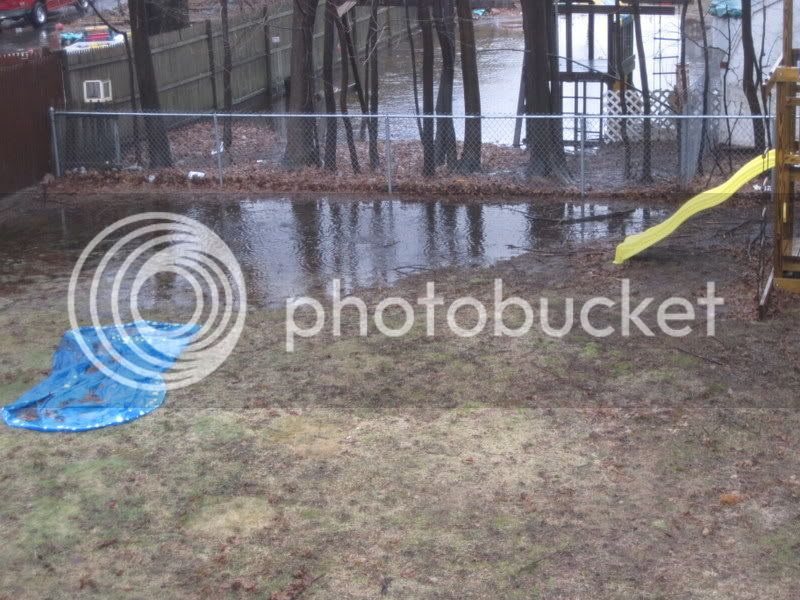 We thought the swingset might be more fun as a waterslide. But hey, at least we're not our back neighbors. Do you see their yard? Look closer: 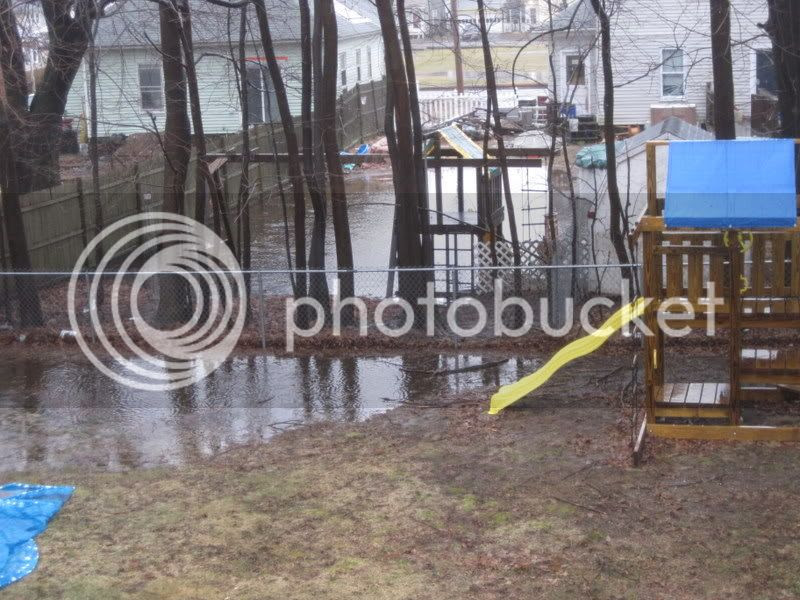 It's been raining here for about 36 hours and damn. That's a lot of water. Poor Andrew slept on the couch last night so he wouldn't disturb me when he got up once an hour to go sweep water towards the pump in our basement. Our "water-proofed" basement. Granted, we only had them water-proof one wall because that used to be the only wall where the water came in. We think we'll be calling them to come back.

And now I get to spend the rest of the day going down there every hour to sweep water towards the pump. Methinks we will be having take-out for dinner tonight. 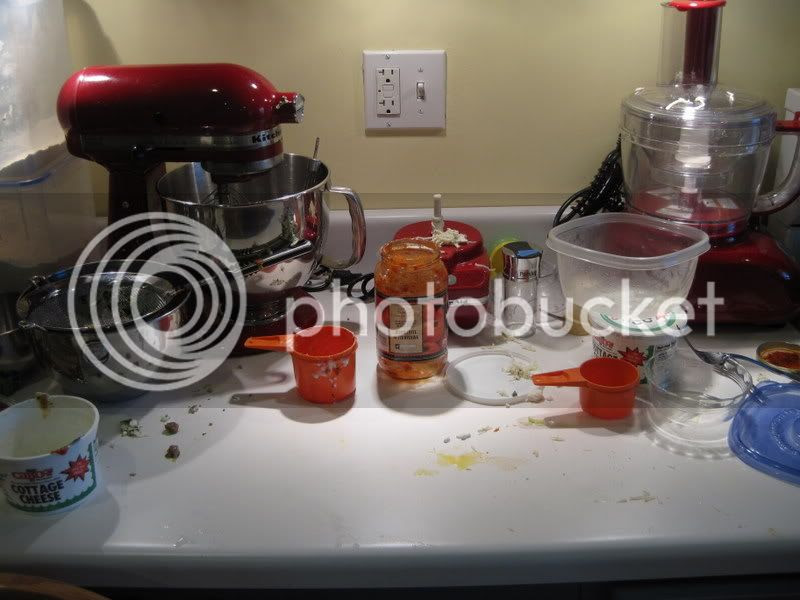 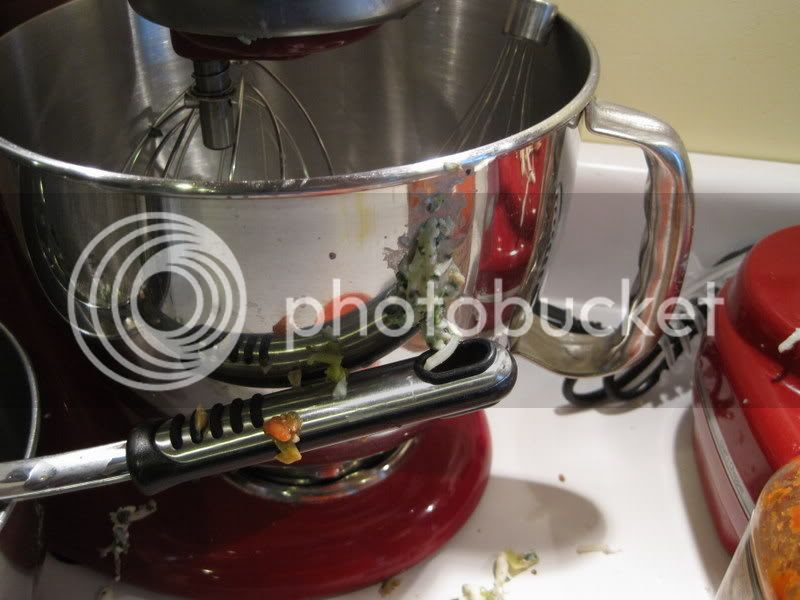 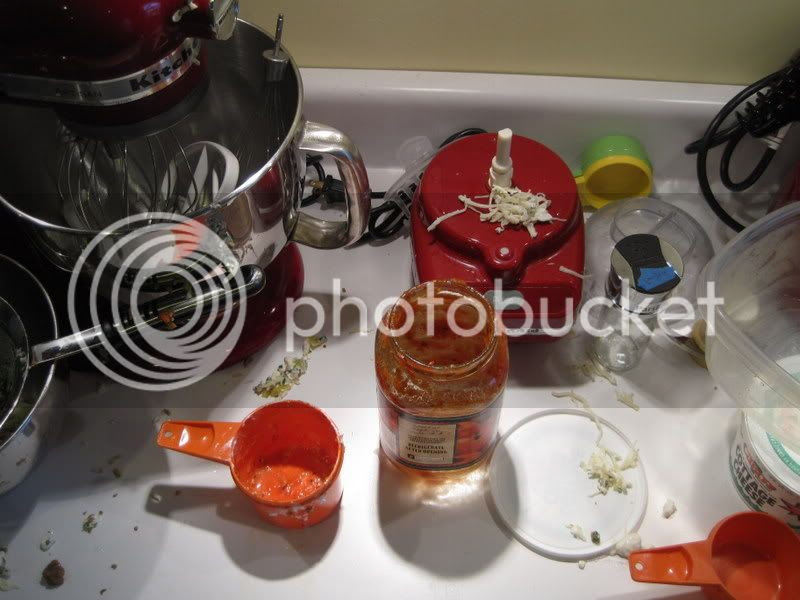 There were... a few extra dishes to wash than if I had done it myself. And I found some hardened cheese on the wall behind the mixer yesterday. Hey, I'm just glad there was none on the ceiling. (checks ceiling)

The results, howevere, were delicious, and I might post the recipe for you because mmmmmm. This was the same day that I spent three hours making Cook's Illustrated potato leek soup that Jack touched his tongue to and pronounced yucky, but Jack is insane because it was so good.

But here's the thing: I didn't expect Jack to like the soup. That's why I also made sausage pasta pie, which tasted like sausage and cheese and which I assumed he would love. And I let him help me make it! And while making it, he ate multiple fingersful of raw sausage (tofu! tofu sausage!) and liked it, so I was sure the meal would be a home run.

And then he wouldn't even try it. After the brush with the potato leek soup, he declared that he "didn't want this dinner" and that he "was leaving."

"Oh no you're not," I said. "You don't get to just leave the table. You have to ask to be excused." This went on for a while until I could feel myself starting to lose it and I said, "OK, you're excused. Go. I'm getting mad, so leave."

Ten minutes later, after absolutely no intervention from me, he came back and sighed, with an air of long-suffering, "OK. I'll try it." He took a bite, chewed, and spat it out, and had a banana for dinner.

But here's the reason I'm subjecting you to this story. We had pasta pie leftovers on Friday night. I simply put some on Jack's plate without comment along with some beets, which I know he'll eat. And what do you think happened? Yes. He ate it with great relish, said it was "so good", and asked for more.

I win this round, Jack. Ha.

Edited to add: I just watched the news, and am feeling a bit less sorry for myself. Also, Andrew is home because I had to send for him since I could not keep up with the water AND tend to the children. Those darn children, always needing something.
Posted by Dr. Maureen at 9:02 AM 6 comments:

I mean, what do I do in that situation? Do I say, "Yes, Jack, you are correct"? What about, "Well, neither do you, anymore, my friend." Because the only thing that would end the loop of observation would be a vocal acknowledgement. And before you say anything, yes, I tried to distract him. It went like this:

"He doesn't have very much hair, Mom."

"Jack, do you want to watch a show when we get home?"

Happily, the man seemed not to hear. Now whether that was because the wind was whipping away Jack's words or because he was graciously feigning deafness I couldn't say, because I certainly wasn't about to make eye contact.

Well today we went out for dinner and, lo, we were seated right by an elderly couple. And hey, look at that! The man didn't have very much hair! I might not have noticed that, myself, but fortunately I had someone handy to point it out to me.

Please accept my sincerest apologies for ever saying the dinner you spent three hours preparing was yucky. Now I know why you were so mad.
Posted by Dr. Maureen at 8:01 PM 5 comments:

There are some things about Nora that I want to remember. For example, she's started waving for real and it's about the cutest thing you ever saw, particularly when it's accompanied by a breathy little "Haaahhhhh dah!" She does it so carefully, too, holding up her little hand and arranging it just so and then flapping her fingers all the way open and all the way closed.

She gives full body hugs and shakes her head back and forth when she wants an Eskimo kiss. She tried out the swing at the park for the first time today and screamed with delighted joy for the entire ride.

And have I told you that Nora is mobile? Oh yes. But she's not crawling. No, Nora skooches. From a sitting position, she leans forward and uses her hands to pull her butt forward. She's getting really good at it. On the hardwood she's pretty darn fast, but rugs only slow her down now. They don't stop her. Neither does a rubber non-slip bathtub liner; last week I gave both kids a bath at the same time and Nora kept crowding Jack down to the deep end of the tub.

But most importantly, Nora is the easiest baby that has ever lived. Truly. The next time you hear me complaining about her sleep, feel free to tell me to shut it, because this is a baby who plays by herself for thirty to forty minutes at a time. Thirty minutes. She's eight months old! Have you ever heard of such a thing? I just plonk her down on the floor and toss her a few toys and I am free to take a shower, drink some coffee, clean the bathroom, what have you. My mother is still talking about a visit a few weeks ago when Nora hung out by herself in the living room for a half hour, happy as a clam with a toy car, while we all drank tea in the kitchen. And her naps! She naps like a DREAM BABY. When she's tired, I read her a book, nurse her and put her in bed. Boom! Done! But if I'm not there, nursing is not required. Anyone else can read her a book and put her in bed. And then she goes to sleep! OK, maybe you have to pat her back for two minutes. My mother-in-law babysat Nora at their house yesterday while Andrew, Jack and I went to see Curious George Live! (more on that later), and could not get over the simplicity that is Taking Care of Nora. "She played by herself on the floor for thirty minutes!" she said when we got back. "And then I put her in bed! And she slept for two hours!"

I know, Mother-in-law. I know.

And honestly, the sleep thing is fine. Yes, we have rough nights now and then when she gets up at three and won't go back down, and yes, she seems to think that 5:00 am is the PERFECT time to get up for the day and maybe 4:30 is even better, but after reading this post, perhaps you think I ought to shut my pie-hole in regards to complaining about such things. And perhaps you are right.

Because Nora is a delight. A love. A sweetie. I think we'll keep her.
Posted by Dr. Maureen at 8:28 PM 4 comments:

I just finished doing the budget and I'm basically done with the computer for the night. But! I wanted to show you Jack's new haircut. Andrew took him to get it cut on Saturday, and Jack wanted to go to the barber with the boys instead of the salon they've been going to the past few times. Their barber retired, though, so they went to a new guy who, it would appear, has a fondness for clippers: 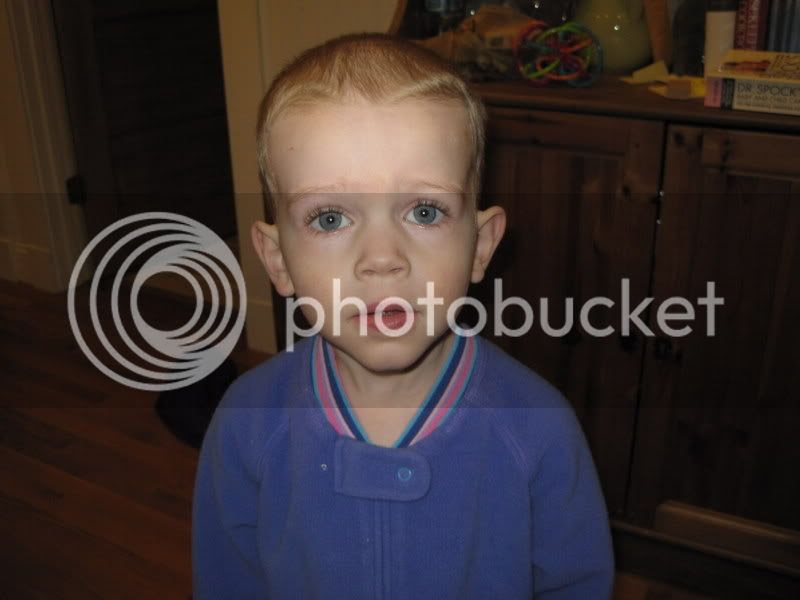 Yup. He may as well be bald, because his scalp is quite visible through is baby fine hair, a problem that was masked by the little length he used to have. Ah, well. It will grow back. And also, he doesn't look quite that forlorn as a regular thing. Witness: 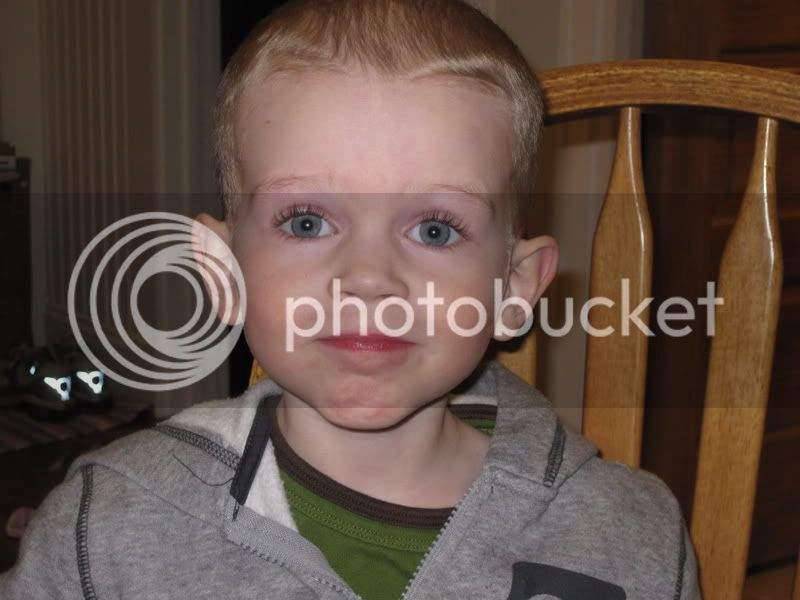 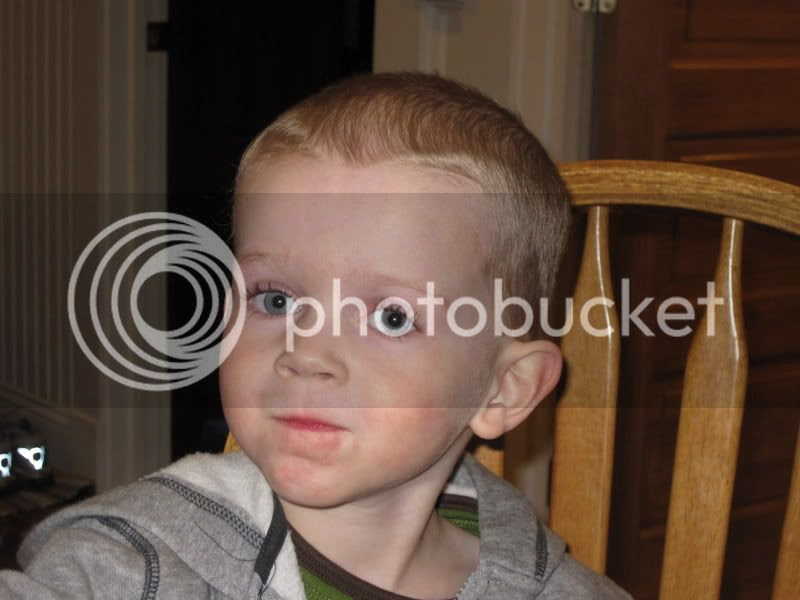 Jack also likes to take photos with my new camera, and I very much enjoy seeing the world through his eyes. I had no idea I was so tall! But I had to share this series with you. It's best if you flip through them fast. 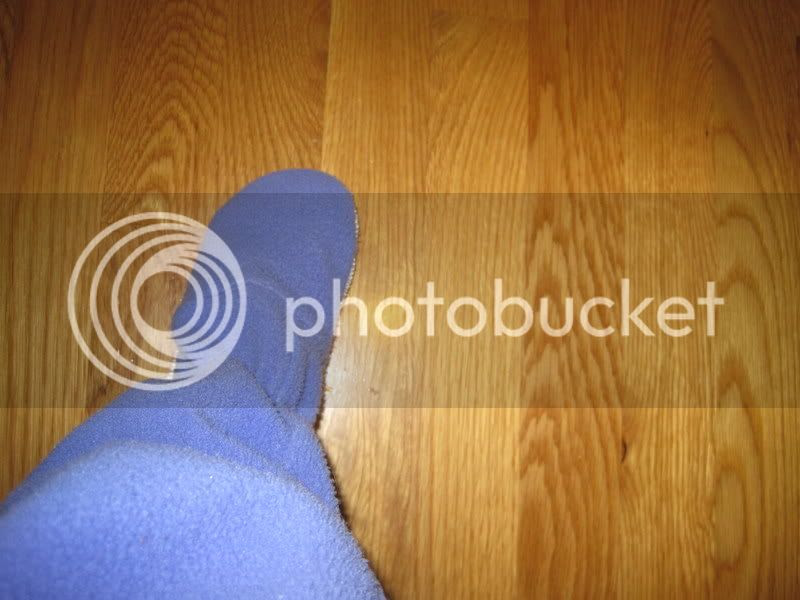 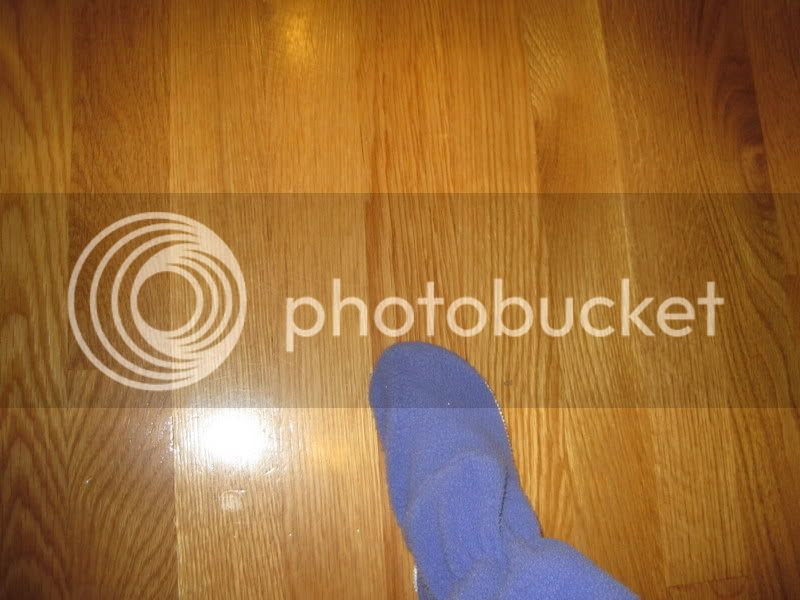 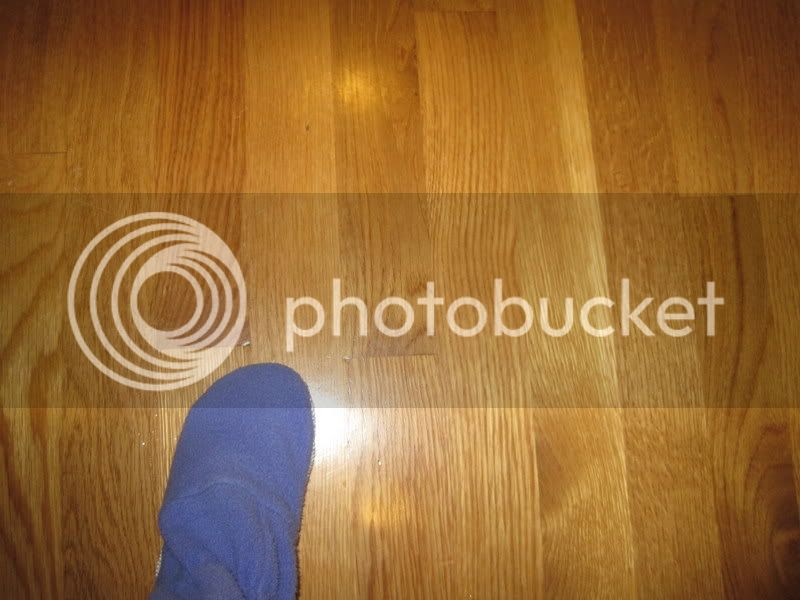 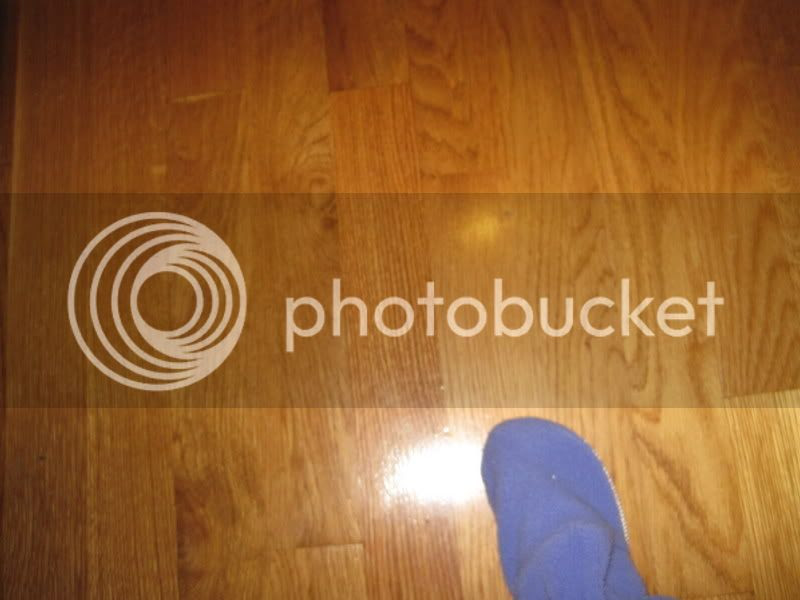 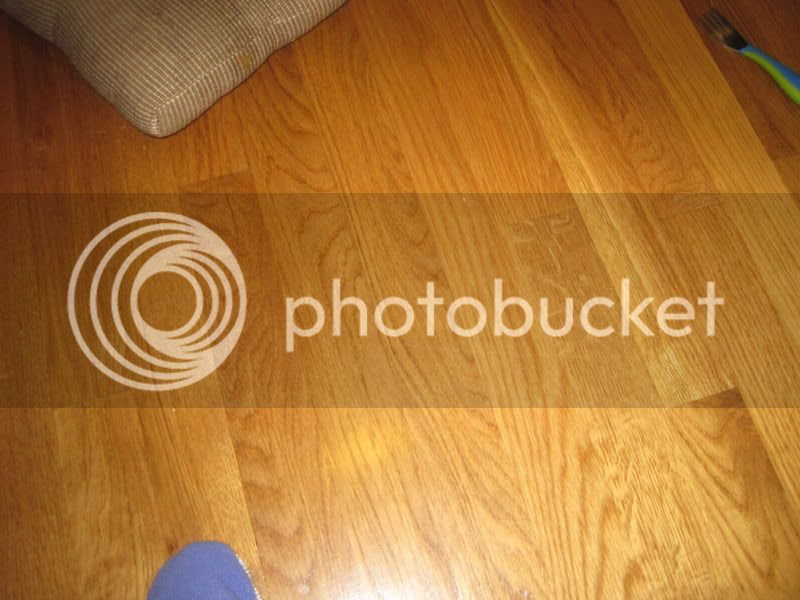 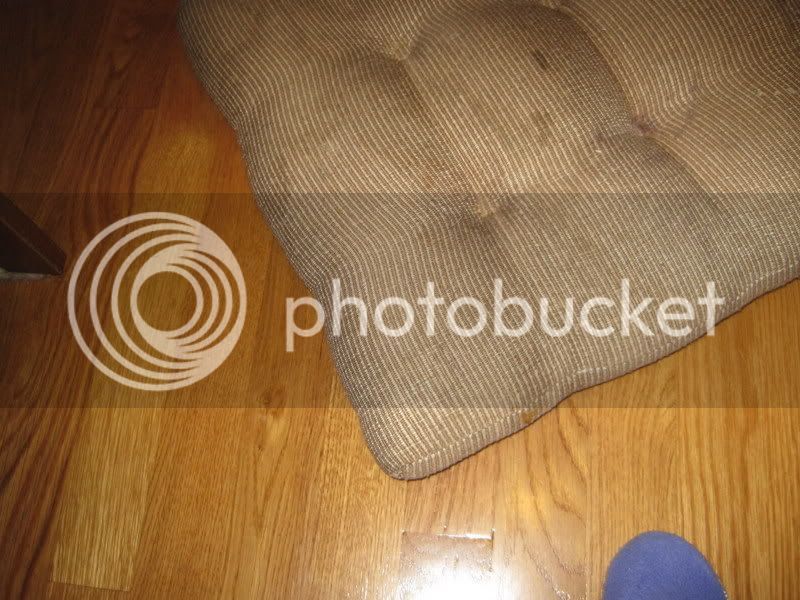 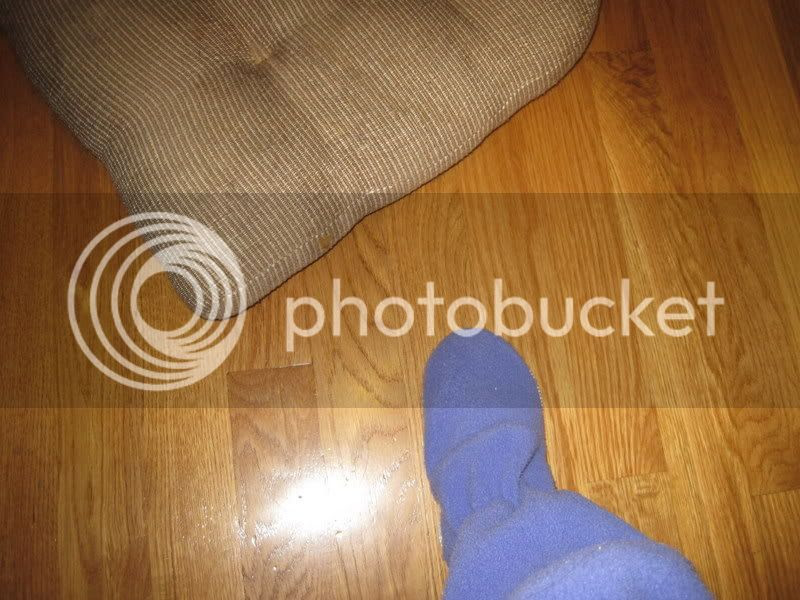 And, lastly, I wouldn't want Nora to be left out. Have you ever seen a smile this wide? I mean, truly? 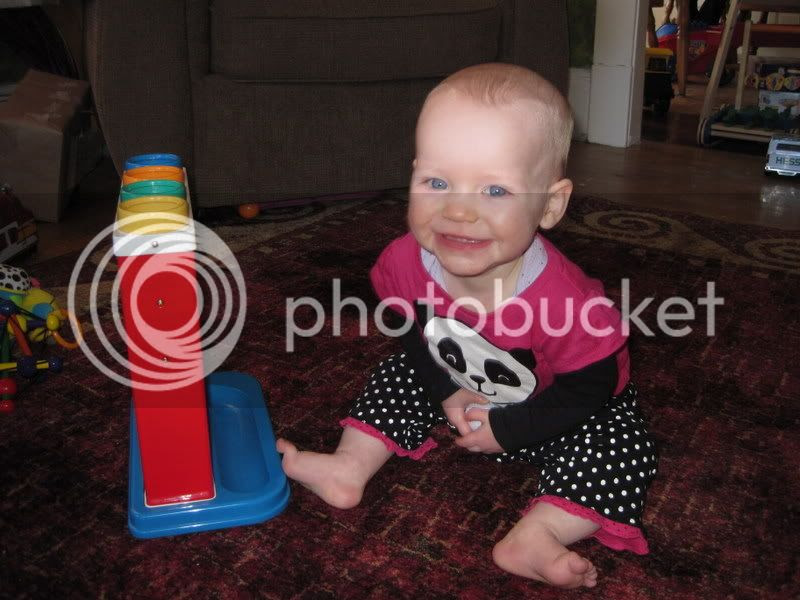