So now that the kitchen is finished, I can stop blogging about it and never bring the subject up again! What? Oh, you wanted to see pictures! Right.

Well first let’s recall the disaster that was the old kitchen: 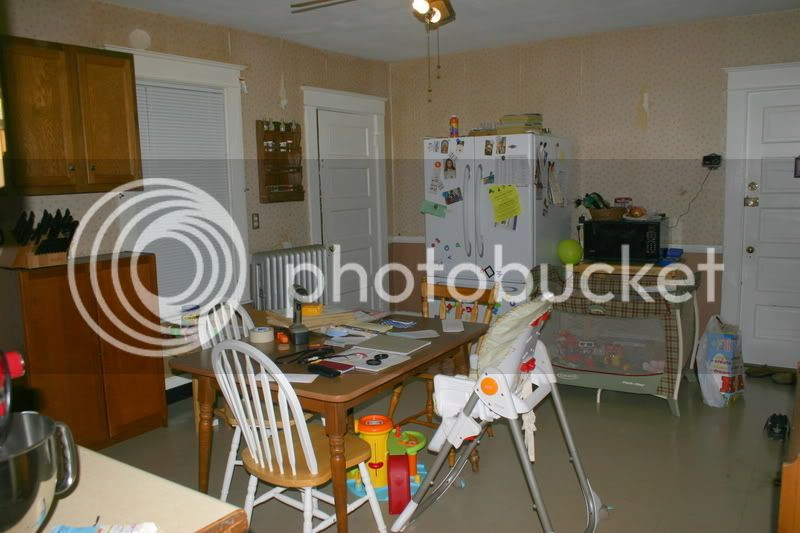 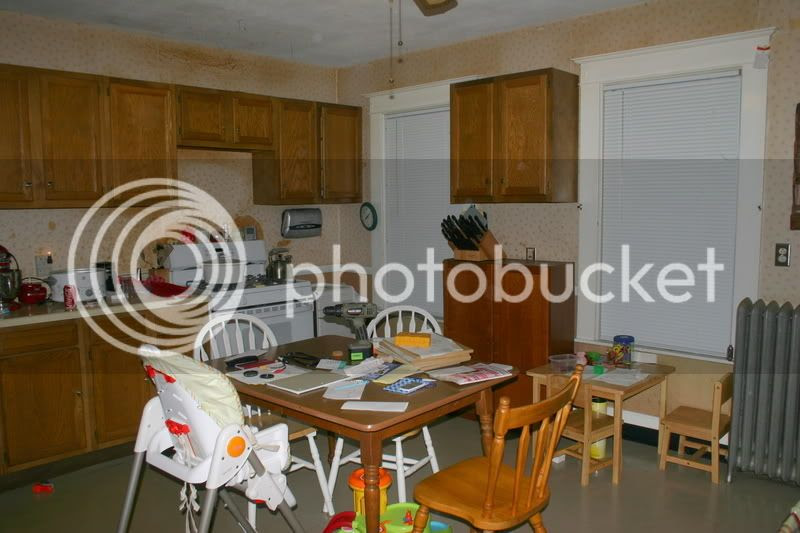 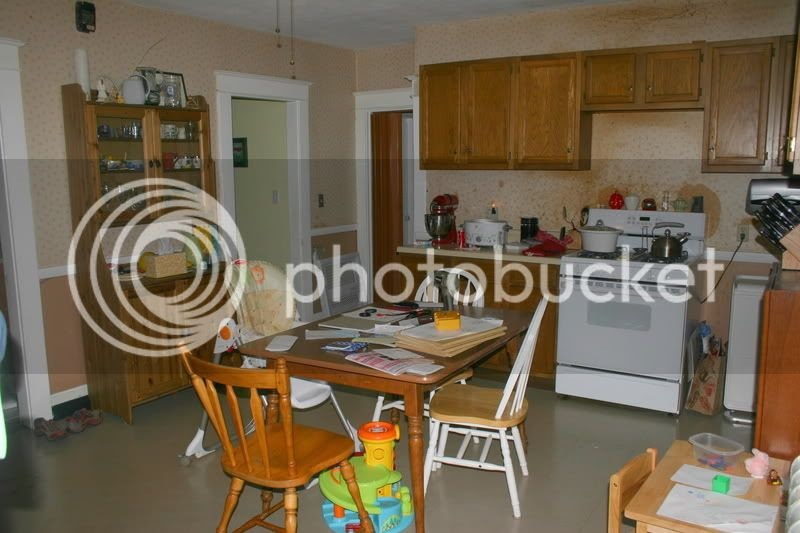 Dudes, I FORGOT how awful that was! Look at the wall above the stove! 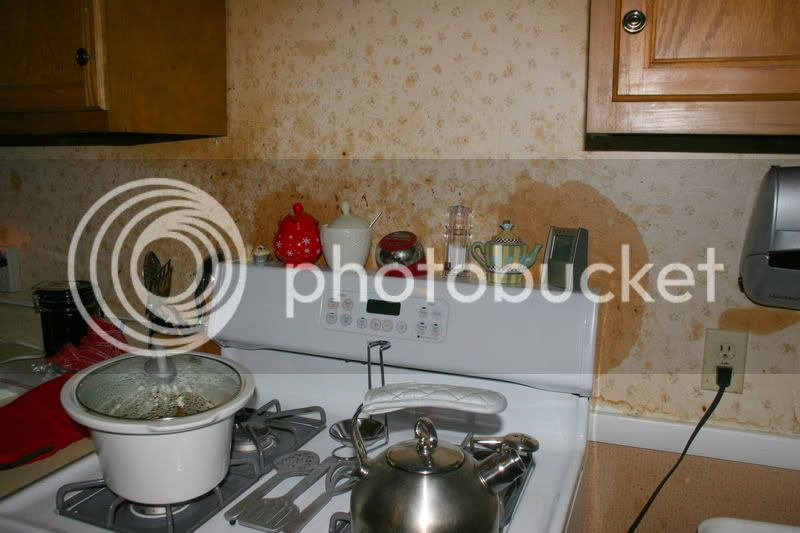 And also look at how the crockpot is out because the day I took these pictures, which was the day before we started this ordeal, I made a nourishing pot of piping hot lentil soup to warm us all up on that COLD WINTER DAY. And now it is July. And you know what else? When I said up there that the kitchen was finished, I totally lied. It’s not finished. We are still chipping away at painting the pantry cabinets, we haven’t yet purchased the drawer hardware, and yesterday Jack pulled one of the freshly painted kitchen drawer fronts CLEAN OFF THE DRAWER.

But! Andrew took the after pictures before that happened! So ignore the lack of drawer hardware, and behold the wonder and the glory that is our new kitchen! 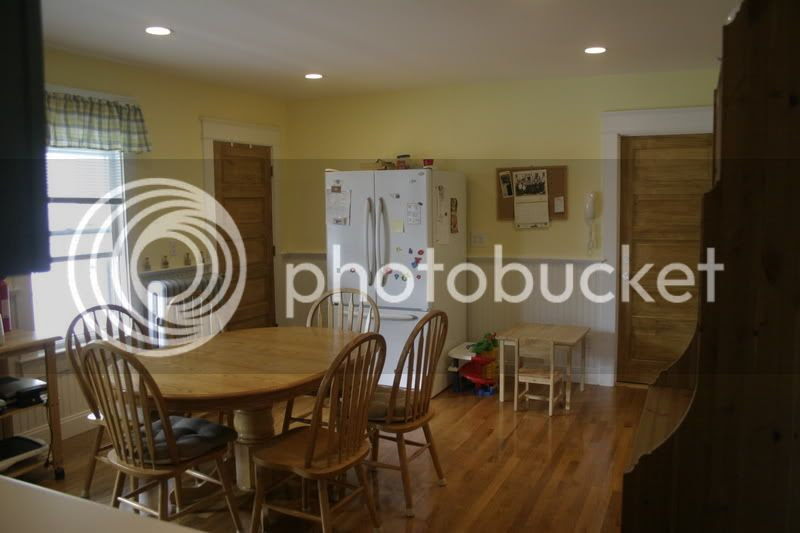 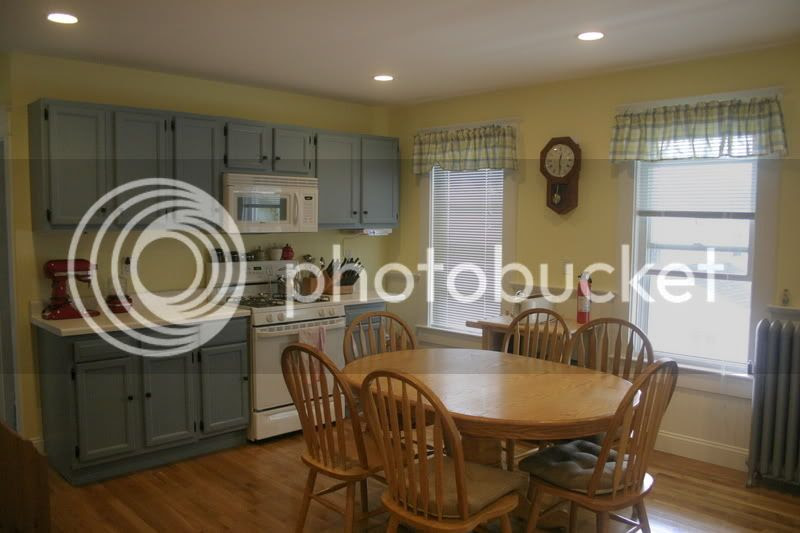 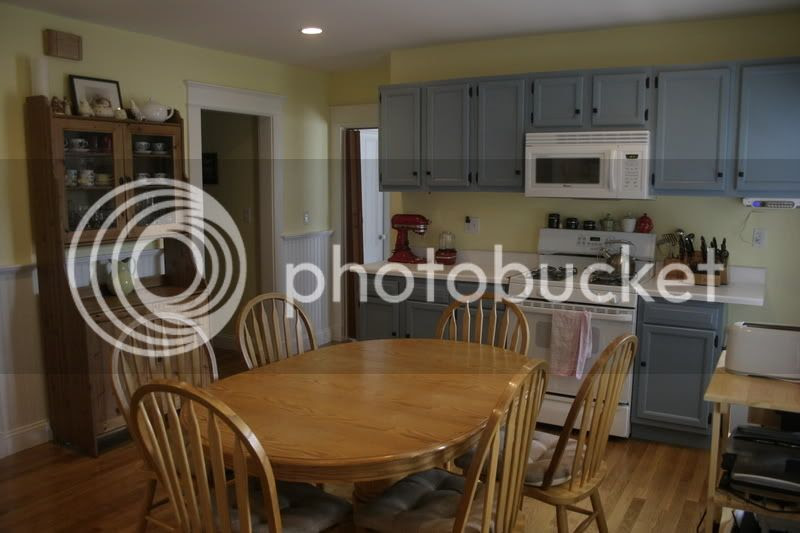 Isn’t it beautiful? (The colors, if you are interested, are Benjamin Moore Polaris Blue, Provence Crème, and Super White.) And look how clean! See, part of the reason these pictures were so long in coming is that we’ve been having trouble keeping the clutter down to a reasonable level in there, and I obviously didn’t want to take after pictures in which the counter top was not visible through the layer of crap. So Andrew cleaned up in the time-honored tradition of hiding all the junk in the dining room, so rest assured, the countertop has returned to its normal state of hiding.

But that’s OK, because we don’t really like the white countertops that much. If money were no object, we probably would have bought recycled glass countertops, but, you know, if beggars wished for horses, they’d ride away. Or something. Still, our original plan was to get a better color of Formica, and there’s a whole long involved story about how we ended up with white. It goes: Blah blah blah, white was cheap. The end.

I’m not showing you a picture of the inside pantry, because, as I said, it’s not done. But almost! We are about halfway done with painting the cabinets, and then the only major thing left will be the linen closet door, but no one cares about the linen closet door. Especially you. I will not therefore show you after picture of it after I paint it, currently scheduled for sometime in June of 2012.

I am going to end with the following, completely unrelated Jack tidbit: Today, Jack hit a major, and I mean MAJOR milestone. He has learned to blow his nose. Talk about singing angels.
Posted by Dr. Maureen at 10:17 PM 7 comments:

A few things I have learned about the "Mom" version of myself:

1. Unlike the childless, tiny-pursed me, the "Mom" version of me carries a big ol' honkin' bag. But I get them for less than $7, so any sting is removed when I get to say, "Thanks! It was only $6!" in response to compliments. Also, aside from my wallet and a diaper or two, my purse is full of toys, so it's generally more fun than the little one. I was once rooting through it looking for my sunglasses and commentating on the contents for my friend's benefit. "There's a one, there's a seven," I said. She was confused, because she thought I meant money. "No, an actual 1 and a 7," I told her, and held up some foam puzzle pieces that Jack likes to carry around. And finally, a large purse that costs $6 is a heck of a lot lighter than a small purse that costs $110. I think it's because the $6 one might not be made of leather.

2. I am the mom at playgroup whose kid has a dirty face, food-stained mis-matched clothes, and no snacks. Fortunately, my playgroup is forgiving. (I mean forgiving of the snack thing; I'm sure they don't give a damn about the dirty face.) In my defense, I often don't bring snacks on purpose because playgroup tends to meet close to supper time, but sometimes I just forget. Also, I do wash his face. Really! He just gets dirty SO FAST. I am 100% reconciled to food-stained clothes though, because he's one. He spills stuff.

3. I am not above teaching my child things for my own selfish amusement. Jack knows what zombies say, ("Braaaaiiiinnns!") and what to do when I say, "Wonder Twins Power, Activate!"

4. I believe it's never too early to get kids interested in current events. 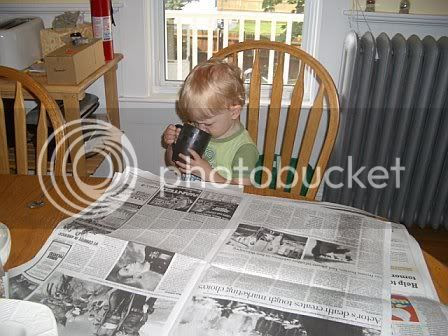 Oh! Hey! some of my new kitchen is included in that shot! Which reminds me: I owe you a real picture! I will get on that pronto. The main kitchen is essentially done and is good enough for a picture. We're going to start painting the inside pantry this Saturday, because we refuse to lose momentum.
Posted by Dr. Maureen at 8:12 PM 2 comments:

Email ThisBlogThis!Share to TwitterShare to FacebookShare to Pinterest
Labels: Jack, Kitchen Remodel, Me

I hosted a bridal shower this weekend. It was a smashing success, if I do say so. For anyone interested, there are two secrets to a good bridal shower. One: Have lots of food and desserts. (Seventeen separate delicious pasta entrees, ice cream sundaes, and three different kinds of homemade biscotti, in this case.) (I should note that I provided the ice cream and sangria, the bride’s very Italian family provided the rest.) (Three different kinds of biscotti! Homemade biscotti! Three kinds!) Two: Play Shower Bingo, and no other games. For Shower Bingo, you provide each guest with a blank bingo grid and a pen, and they fill in the boxes with gifts they think the bride will receive. Then as the gifts are opened, the guest check off their bingo sheets and when they get five in a row, they win! But make sure you have some prizes to hand out, or winning is anticlimactic. And to answer your question, you are absolutely allowed to fill in the gifts you yourself brought. (At my family showers, my cousins always win Shower Bingo because there are seven of them in one family and they all know each others’ gifts. They are also the ones who taught me the game. Coincidence?)

Now I say to play no other games because, in my experience as a cranky old party pooper, everyone hates the games. One or maybe two can be fun, but I’ve been to showers where we were made to play upwards of five different games and, frankly, we all just wanted to go home. But everyone likes Shower Bingo, because it takes place during the gift-opening and therefore takes no time away from the eating or socializing. So! Shower Bingo and that’s it.

But as much fun as the shower was this is how the day ended: 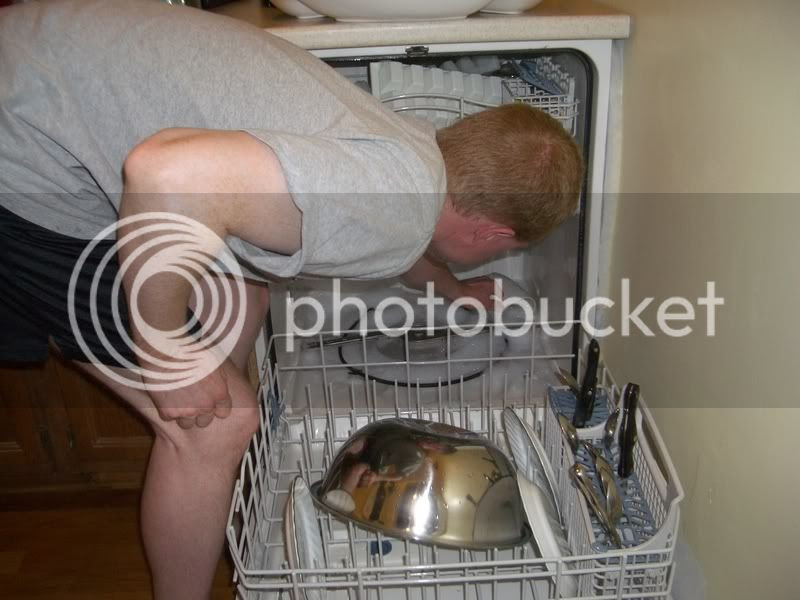 Why? Well, we ran out of dishwasher detergent yesterday, so I bought some more. 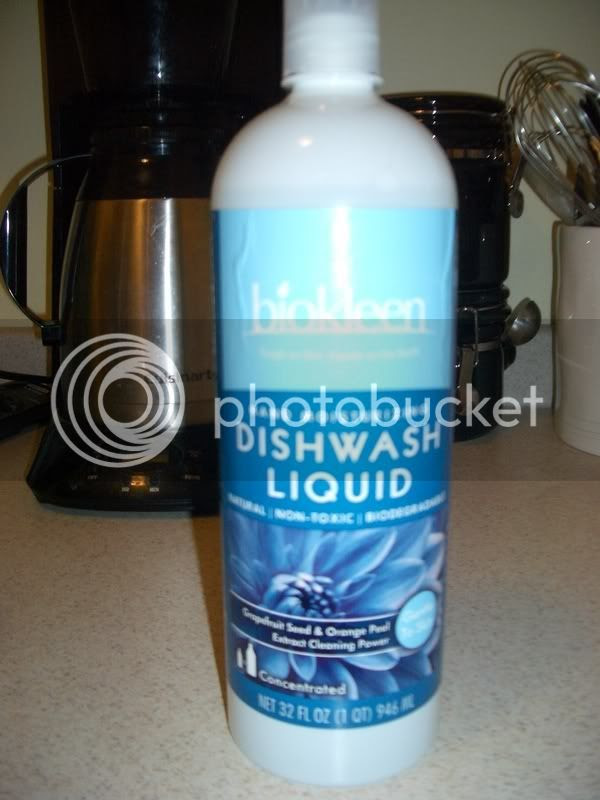 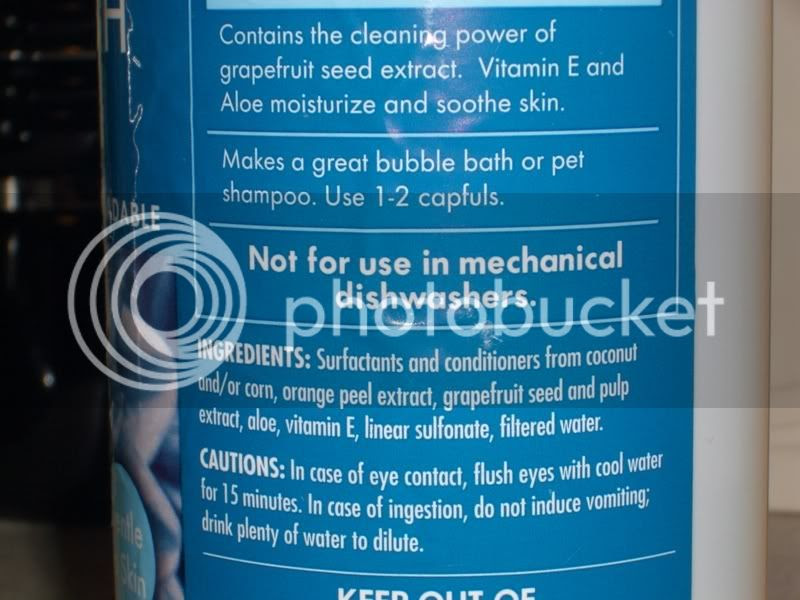 I swear it was right next to the Cascade.TM
Posted by Dr. Maureen at 4:23 PM 4 comments:

Email ThisBlogThis!Share to TwitterShare to FacebookShare to Pinterest
Labels: Life, Me

I don't have much to say, but I had to show you this: 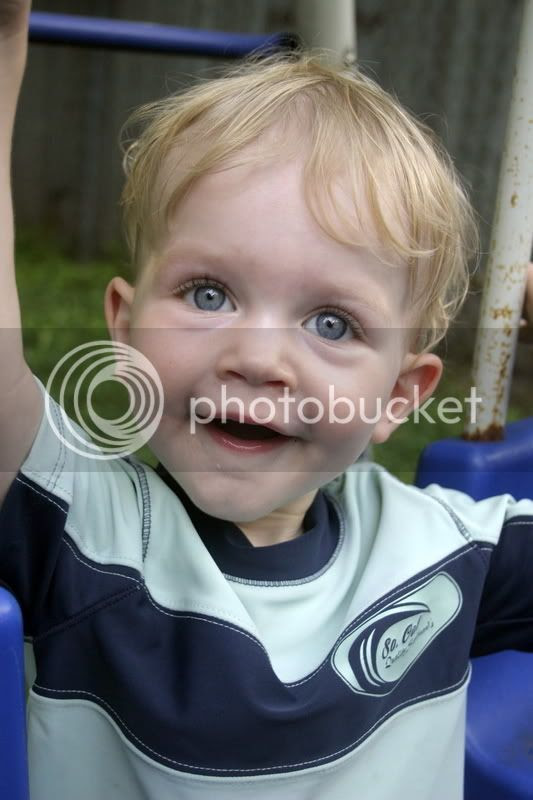 So. I’ve been quite busy. Not kitchen-finishing busy, no. Don’t be ridiculous. It’s only been fourteen weeks!

I have to break in here to say that I couldn’t remember exactly when we started and had to check the blog archives to see. Fourteen weeks? FOURTEEN WEEKS? I mean, I knew it had been a long time, but sheesh. And we haven’t even STARTED the inside pantry. Sob. 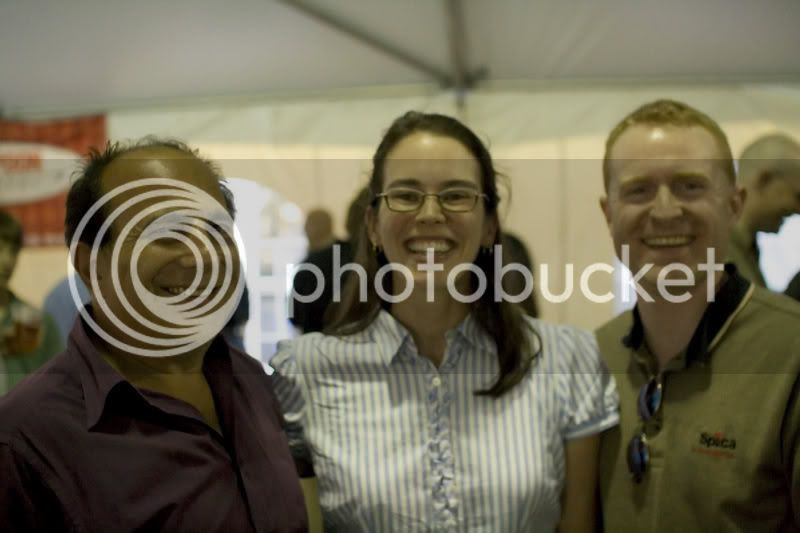 Ray and some NPR geeks

It was a fundraiser for our local NPR station in which we NPR donors were shown the world premier of Car Talk’s new PBS cartoon, As the Wrench Turns, and I have a few things to note. First, as much as I love Click and Clack, their cartoon is kind of terrible. Second, there was a question and answer period, and Tom, the one I did not get to meet, reminded me of my aunt who recently died. It was spooky. It’s not that he looked like her, it was more his attitude. Something about the way he said, “Ed, no one gives a shit,” when the MC was trying to get the guys to explain every detail about how the cartoon came to be. It kind of warmed the cockles of my heart. And lastly, there was free food and beer at the event, and when we arrived, Andrew and I saw a big crowd of people over by the beer sign. “That must be the line for the beer,” I said. It wasn’t. It was the line to meet Ray. There was no line for beer.

No line for free beer.

That’s when I knew we were at an NPR event. Maybe if it had been white wine spritzers?

At any rate, we waited in the line – after we got our beers – and got Ray to sign Jack’s talking drill. So even though the cartoon was bad, the night was an overall success. 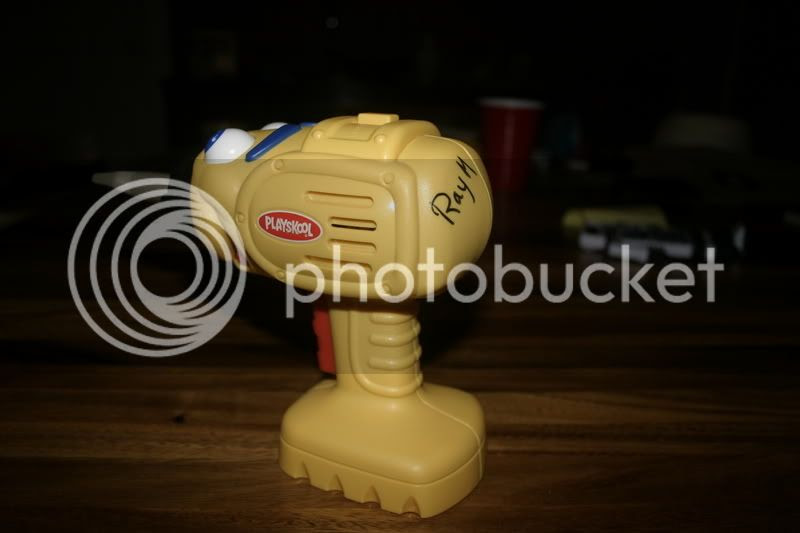 The drill in question

Now for the vacation. Last weekend, we took a short trip to visit a certain internet superstar: 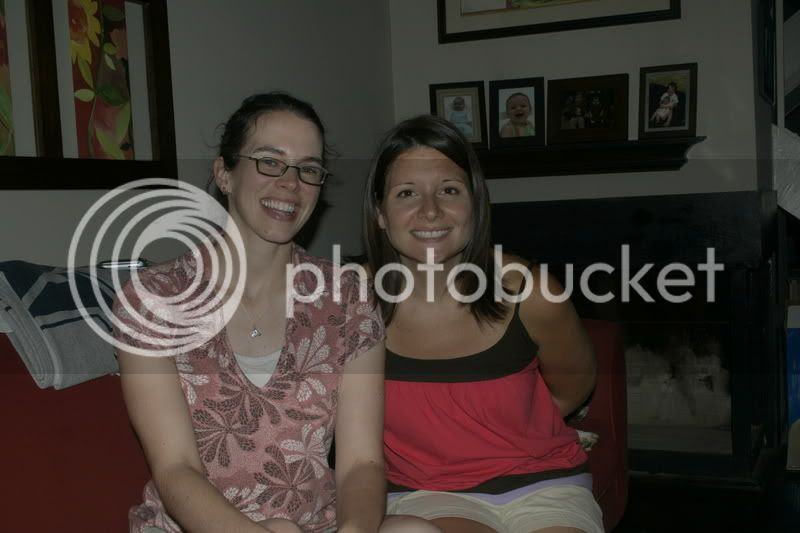 The internet rockstar in question

We had a fantastic time. We got to see ducks, goats and geese*, a giant elephant and bugs**. Also motorcycles!*** Although I have to say, Jack would probably have been fine if we had spent the whole weekend at the airport, looking out the window: 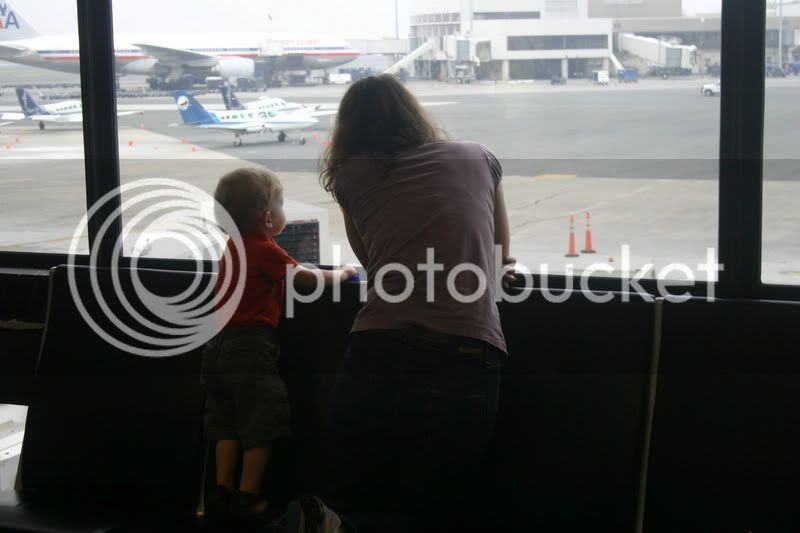 I don’t really have any hilarious stories about the weekend. Jack, being the easy going little dude he is, slept just fine in the strange hotel room. Sure, there was an incident at 4:30 am on Sunday morning in which we heard “Where bink go? Where bink? Where go bink?” over the monitor, followed by a shrieking incident at 4:50 in which we discovered the light we had left on for him had burned out. No, he did not go back to sleep. But I would not DREAM of complaining, as he had gone to bed at 7:30 the night before, and he slept through on Sunday night. He also took all his naps.

I just reread that paragraph and realize that no one really cares except for maybe Arwen, who is cursing me under her breath right now. I’m really sorry, Arwen! I’m sure our second child will never sleep at all! (Note: I am not pregnant.) So, sorry about that.

Asher and Jack seemed to get along fairly well, so long as Asher kept his mitts off the Little People gas station and Jack stayed well away from the Baby Einstein DVD case. 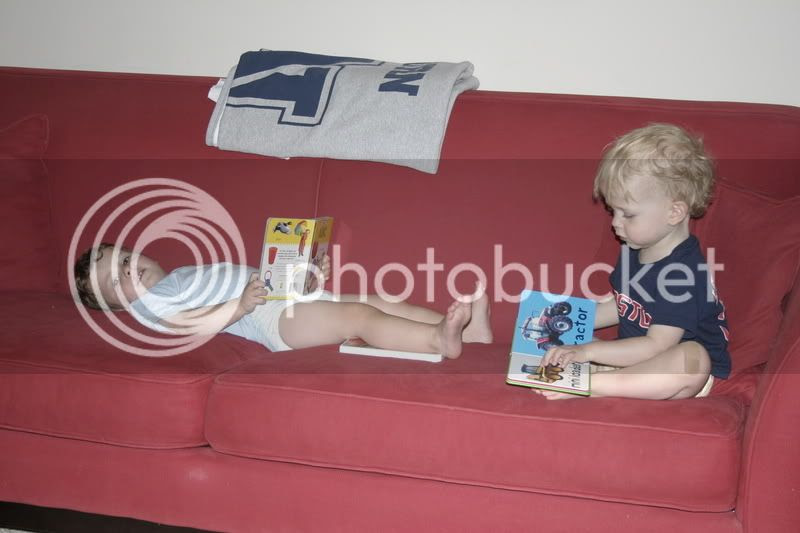 These two are possibly tired

All in all, it was a fun but uneventful weekend. And the best part was, even when we were sitting around the hotel room while Jack slept, we were still not working on the kitchen. 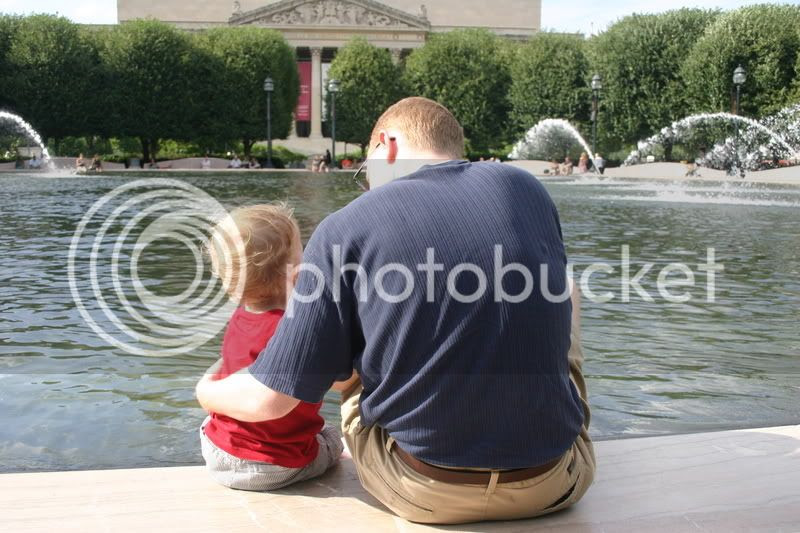 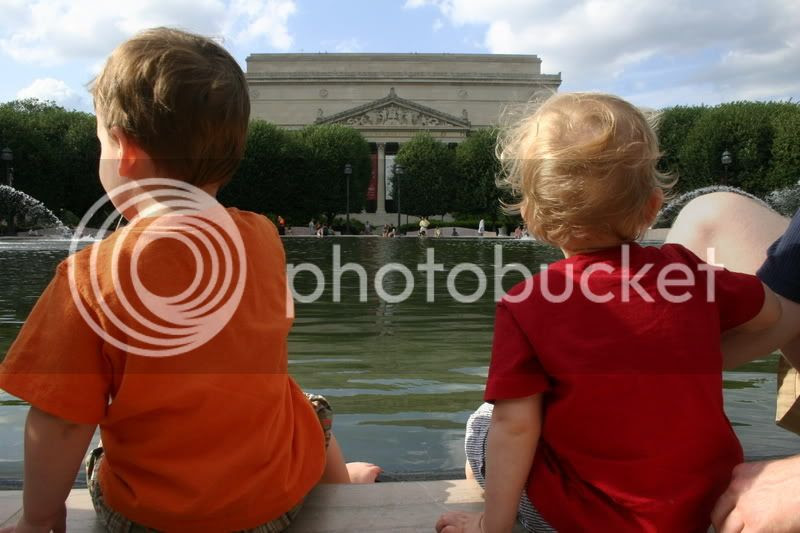 Speaking of the kitchen, it is, as I have said, not quite done. But almost! For real! There are a few areas of touch up painting and we have to move the refrigerator back in, and that’s it! Well, except for the drawer pulls and the cabinet kickboard and hanging stuff on the walls, but I promise I will not make you wait until it’s completely finished before I show you a picture. You will have to wait until the refrigerator is back in, though.

In the meantime, I leave you with these teaser “after” photos. Witness our excellent color choices! 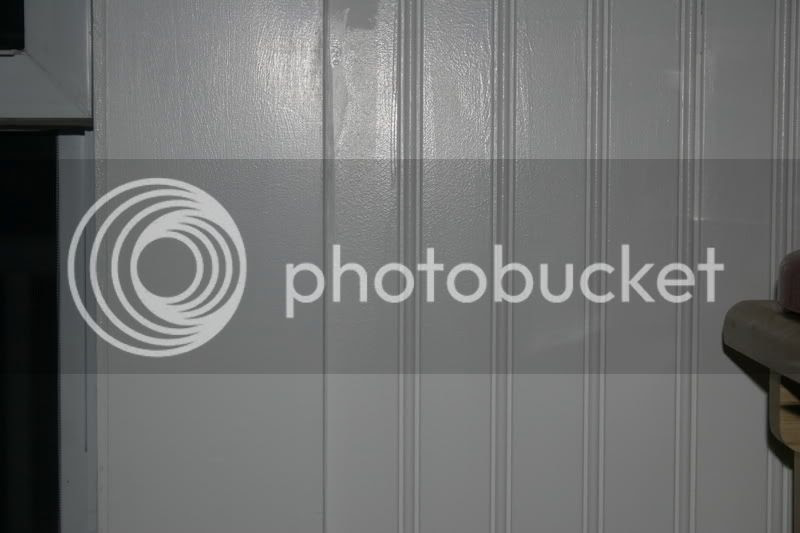 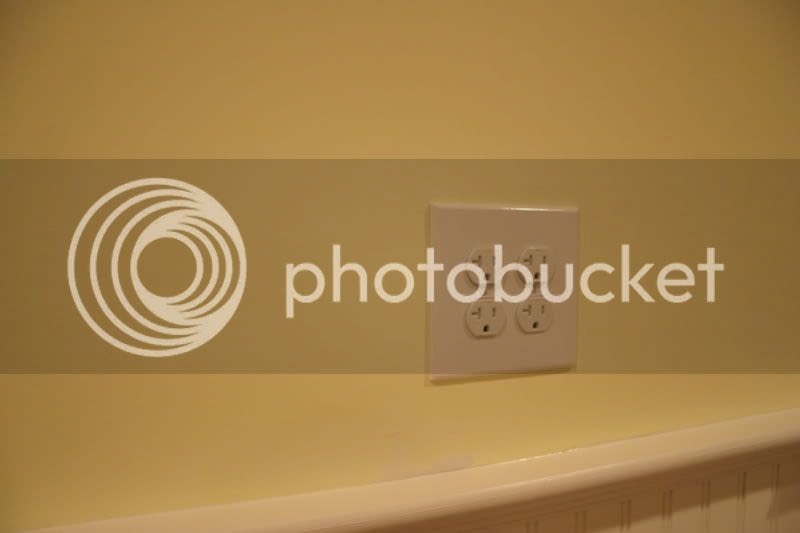