Then we had ice cream and went to the sprinkler park.

Pardon me for a minute while I post a list of words Jack says along with his pronunciations. This isn’t a complete list of his vocabulary, just the words that are particularly cute and that I remember at this moment.

I will wrap up with a story of my putting him to bed last night. We finished his stories and I put him on my shoulder to sing him his songs, as per usual. He had a few requests.

A hundred years ago when we were packing away all of our kitchen stuff for the three weeks’ duration of the kitchen remodel, we noticed that we had an inordinate number of baking pans. We couldn’t do anything about it then because we packed away our kitchen stuff at the last possible second and had to have it all done that very night. There was no time to sort and choose. We swore, however, that when the time came to put the stuff away in the shiny new kitchen, we would definitely NOT keep all seven 9x13 Pyrex baking dishes, all five metal 9x13 baking pans, all eight 9-inch round cake pans and the five different muffin tins that are all different sizes and therefore do not nest inside one another.

But first we have to have the kitchen floor refinished. Again. Man, if anyone had warned us hardwood has to be refinished every ten days, we probably would have chosen a different material.
Posted by Dr. Maureen at 11:06 PM 5 comments:

This is all I've got in me

And then of course, ahead of us likes the seemingly insurmountable task of cleaning a thick layer of plaster and sawdust off what seems like every object we own. And we own a lot of objects. A lot of small objects, with lots of cracks and crevices.

Still, we managed to wash just about every surface in the kitchen itself tonight, so tomorrow I’ll be able to put things into the kitchen as I wipe them off, and we’ll get there. I plan to clean the bathroom tomorrow and maybe even start wiping off the 800 things in the outside pantry while Jack plays with his new toy truck that I got for him today. It’s a “ba-oh-da (backhoe loader),” the caviar of trucks.
Posted by Dr. Maureen at 11:24 PM 3 comments:

Dude, what the heck.

Andrew and I are a couple of well-rested, spoiled first-time parents. This I know. Jack goes to bed by 7:00 and sleeps for a minimum of eleven hours just about every night. So, yes, spoiled. Spoiled rotten. But this is precisely why we don’t know what to do when, for some mysterious reason, Jack wakes up at 11:00 at my in-laws' house where we are sleeping while we wait for the new kitchen floor to be refinished (oh yes, I said refinished, more on that later) and spends the next two hours cheerfully discussing whose chair is whose in the living room. “Dad-eee’s chay-ah. Beebaw’s (Grampa’s) chay-ah. Ghee’s (Gram’s) chay-ah. Mummy’s chay-ah. Ah’s (Jack’s) chay-ah.”

I tried everything in my arsenal to get him to go back to sleep like usual, as well as many things I had never tried before. For example, I acquiesced to his unusual nocturnal request for yo-guh (yogurt) on the theory that hunger was keeping him awake. While in the kitchen, I was treated to a discourse on the objects therein: “Shoes. Dad-eee’s shoes. Sink. Yup. Mmhmm. Wah (water). Yup. Mmhmm. Cup. Yup. Mmhmm.”

Eventually I gave up, and, accepting the risk that he would keep the whole house awake, I put him in his bed and said, “Jack, it’s bedtime. Go to sleep.” I kissed him and left the room. He screamed in rage for about 5 minutes, fell silent, and we heard nary a peep until 6:00 the next morning. 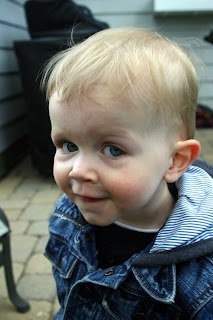 The internet is awesome.

Remember when I wrote about the sad death of Andrew’s beloved TI-85? To my surprise, that turned out to be one of the posts that generated a lot of comments. (Seven is a lot for me, since I normally get two on a good day.) Well that post did more than generate comments, it netted Andrew replacement calculator! 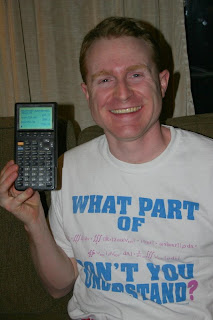 But moved on he has, so Arwen shipped off the old calculator and Andrew, as you can see, is happy as a clam. He has promised to love it and pet it and call it George.
Posted by Dr. Maureen at 10:09 PM 5 comments:

I knew there would be delays

Jesus felt bad that we would be sitting around our half-walled, floorless and doorless kitchen for up to two weeks, and said that maybe they could put the floor in before the doors after all. “Sweet!” we said, and moved Jesus up a number on our speed dial. They were able to start on Thursday, so we had to be out of the house until Saturday afternoon at the earliest to give the varnish time to dry. But because we were going to a wedding on Saturday night and Andrew’s parents were already planning to babysit for us, we just stayed at their house until Sunday.

By Sunday afternoon we were understandably itching to get home and see the shiny new floor. And it was beautiful! And shiny! Very shiny! And…wait, is it extra shiny there in the middle?

But Jesus came through for us and told the floor guys they would not be getting any money until they fixed it. As such, I am typing this at my in-laws’ house because they hot-footed it over to our house today and we’re not allowed to walk on the floor until tomorrow afternoon.

I’ll post some pictures when I get home to my charger. I actually have a couple of non-kitchen related pictures I was going to post this weekend, but the battery – she is dead.

Trust me, though, the new kitchen will be so worth the wait.
Posted by Dr. Maureen at 9:42 PM No comments:

He'll have to have Wile E. Coyote make his business cards for him

Do you all mind if I tell you a few stories about how my child is a genius? A GENIUS. I'm sorry for bragging, but I can't help it sometimes. You see, we were having breakfast on Wednesday, and Jack glanced at the refrigerator and spotted one of the alphabet letters. "O!" he said.

Then he saw another one, and said it again. "O!" So I moved the second 'O' next to the first one. He looked at them both for a second and then said, "Two 'O's'!"

Eighteen months old last week, people, and he can add 1+1.

In other news, he has a crush on the girls from playgroup. We have a picture of him and his friend Amelia, and he likes looking at it so much I put it in his room for him. It's all crushed and folded now, from the times he gazes at it, saying, "Meh," (Amelia). Amelia didn't make it to playgroup this week, but it was at Sophie's house and Jack, Luke and Sophie were the only babies in attendance. Jack was eating Teddy Grahams, and I told him he had to share with Luke and Sophie, but when I tried to make him give one to Luke, he started wailing and sobbing. "Sokie!" he cried. "Sokie! So-oh-oh-kieeeee!"

"Do you want to give that one to Sophie?" I asked him.

Sophie is much prettier than Luke, you see. Not that Luke is not adorable, mind you; he is. Quite. He has huge brown eyes and curly, unruly hair. And very squishable cheeks. But I guess Sophie is more Jack's type.

Eighteen months old is my favorite age so far.
Posted by Dr. Maureen at 10:39 AM 1 comment: