The sidewalk parking has been slowly improving, but there are still some fairly egregious offenders, like this car right here: 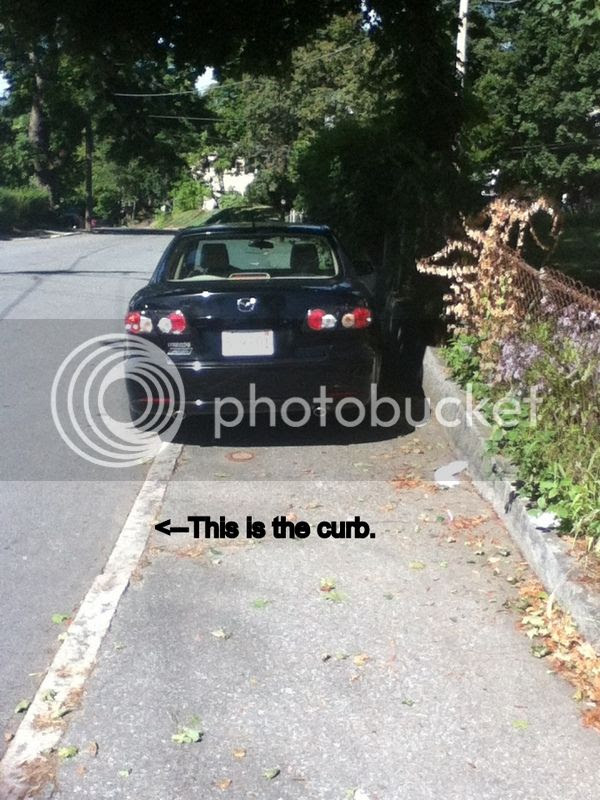 I helpfully pointed out the curb for you, because you might have thought that was a parking lane or something. And this car is parked here every day. The owner of this car considers this piece of sidewalk to be his or her assigned parking spot. It's not a very busy street; I actually never use it, so technically this car has never been in my way. But ask me if I care.

But! Things are not all terrible! Look at this car: 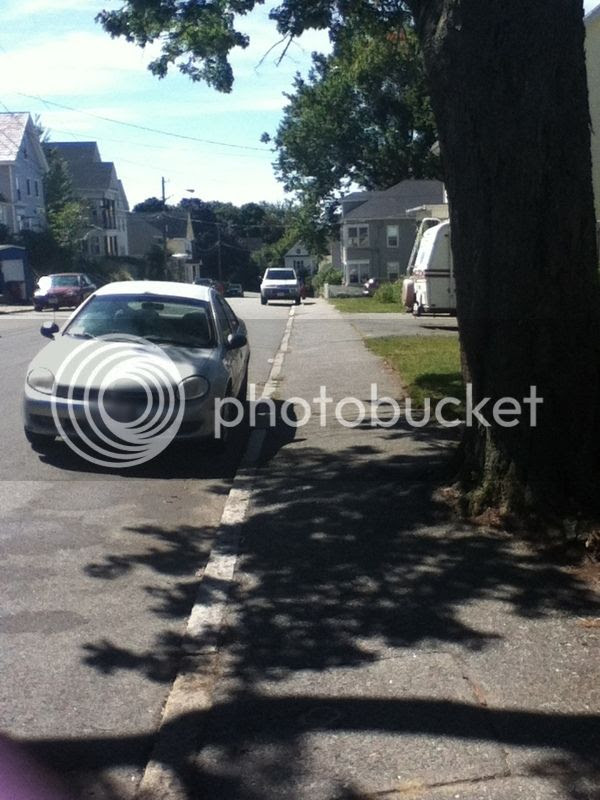 That car is owned by the first person I ever asked to stop parking on the sidewalk. It is owned by a woman who said, "But I don't want my car to be hit," and then made a sort of face when I pointed out I couldn't get by, especially because of that giant tree she usually parked right next to, and she generously said that she would "try" not to park "so close" to the tree. She then continued to park on the sidewalk every day. BUT NO MORE. I think she got a ticket. The guy who used to park on the sidewalk right behind her also stopped, and he is another one who told me that he doesn't want his car to get hit and that he "always parks there" and would not stop. TICKET.

I have been in touch with a city councilwoman and she was putting me on the schedule for the council meeting on Sept. 24. So today I went out with my camera to gather more recent data and made a special trip down to the very busy street on which there used to be a five or so block stretch of cars blocking the sidewalk. But there were only a few cars still doing it! And then a cop saw me taking a photo and pulled over to talk to me. He told me I don't have to do that, because they put a notice in the paper warning people that they are going to start ticketing for this on Sept. 9.

Here's the blurb in the paper, with my city's name redacted:

Police have received numerous complaints from residents about vehicles parked on sidewalks across the city. This is an issue that we deal with the beginning of every school year. Residents need to be aware that parking your vehicle on a sidewalk is cause for your vehicle to be ticketed. Sidewalks need to be kept clear for the safety of the children walking to and from school. Violators put children and residents at risk by causing them to walk around the illegally parked vehicles and into these heavily travelled streets.

Effective Monday September 9, 2013, City Police will be ticketing any vehicles that are illegally parked on sidewalks. Please be respectful of your neighbors and mindful of the safety of others by parking legally.

Do you see that part that says "numerous complaints"? I'm pretty sure that was me, numerous times.

BOO YA. (I am choosing to ignore the part that says we deal with this issue "at the beginning of every school year," as though sidewalk parking is fine when school is not in session.)

And now I don't even have to go to a city council meeting! Woo! But I will remain vigilant, and I'm going to go down and check the status next to park on the busy street when there is a softball game, because the cars LINE the sidewalks on BOTH SIDES during the games. Or they did. Maybe they'll all get ticketed. We can but hope.
Posted by Dr. Maureen at 8:39 PM 4 comments:

Quick takes on a Tuesday because I'm crazy like that