Last week we went on a secret vacation to California. I didn’t say anything before we left because I didn’t want to advertise that our house was empty because isn’t that one of the things you’re not supposed to do on the internet? Tell all the crazy people that your house will be empty for a week? So I didn’t tell you. But now we’re back, and I can tell you ALLLL about it, which will actually just me putting a bunch of pictures up here. Modern day vacation slides.

Hey, did I ever tell you about a history teacher I had in high school who literally showed us vacation slides? He and his friend “Mel” traveled around… Europe? I think? And took a bunch of pictures of each other crouched in front of large landmarks that honestly would not have been blocked at all if they had just stood up like normal people. That guy was weird. He also got the Mexican and Spanish-American Wars mixed up when he taught them to us. Or rather, when he taught one of them to us but added details from the other one. Remember the Maine! And Tyler too! Or something!

Right. California. So last December, my college friend Dr. Lapp (not her real name) who married an adorable Argentinian named Pato but whom Nora calls “Pasta,” came home to spend Christmas with the Lapp Family. (I mention that he is Argentinian only so I can tell you that we went to their wedding in Buenos Aires, and if you ever get invited to a wedding in Buenos Aires you should go. Those people know how to throw a party. Food! Entertainment! Dancing! More food! More dancing! More food! Hey, look at that, it’s 5am!) We managed to get together for lunch during which Dr. Lapp and Pasta let slip that they recently bought a gigantic house with fifteen to twenty extra bedrooms and that we should come visit. “Really?” we said, “Because we will.” So we did.

First of all, I may have taken some creative license there, because Dr. Lapp’s and Pasta’s house is really only FIVE bedrooms. But it is gorgeous. And so well-decorated. It’s like grown-ups live there. I honestly do not understand how people know what furniture and artwork to buy so that it all GOES together like that. And they’re not really done, as they still have to furnish several of the bedrooms. I have to say, if I had several bedrooms to furnish from scratch, I think the pressure would kill me. It’s helpful to have a slew of hand-me-down stuff to start with if you are decorationally-challenged, as I am.

Since Dr. Lapp and Pasta’s 23-bedroom house is a convenient half hour away from Disneyland, we bought a three-day park hopper pass and spent Monday, Wednesday, and Friday there. I have passed the point in life where Disneyland is where I’d spend my vacation, given a choice of anywhere, but that’s if it were just me. Taking little kids to Disneyland is something else entirely, and lordy, it was fun. 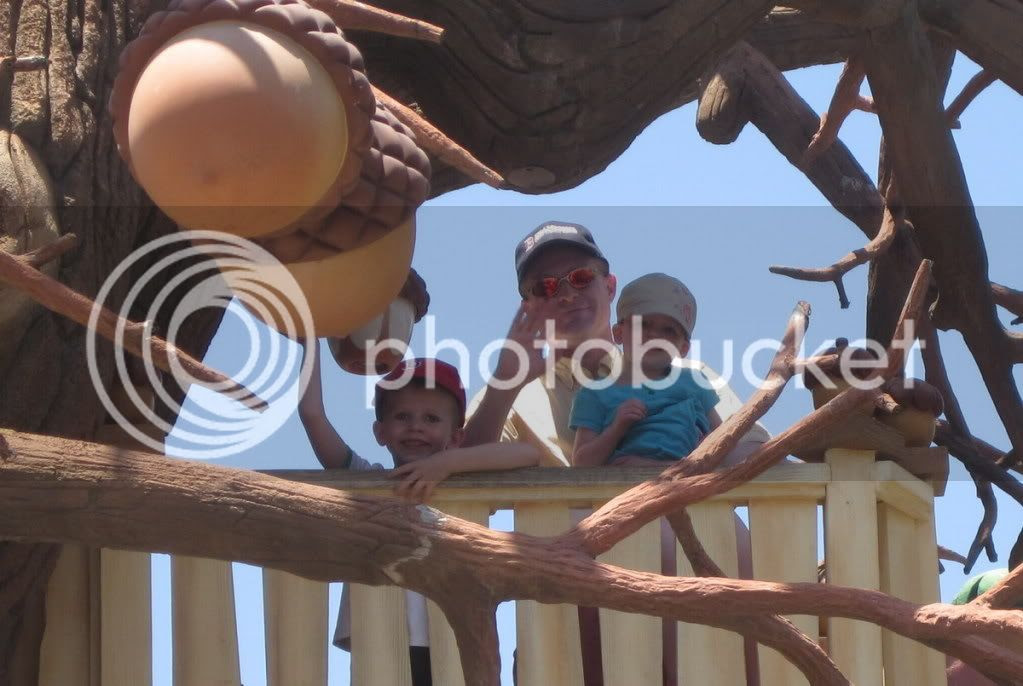 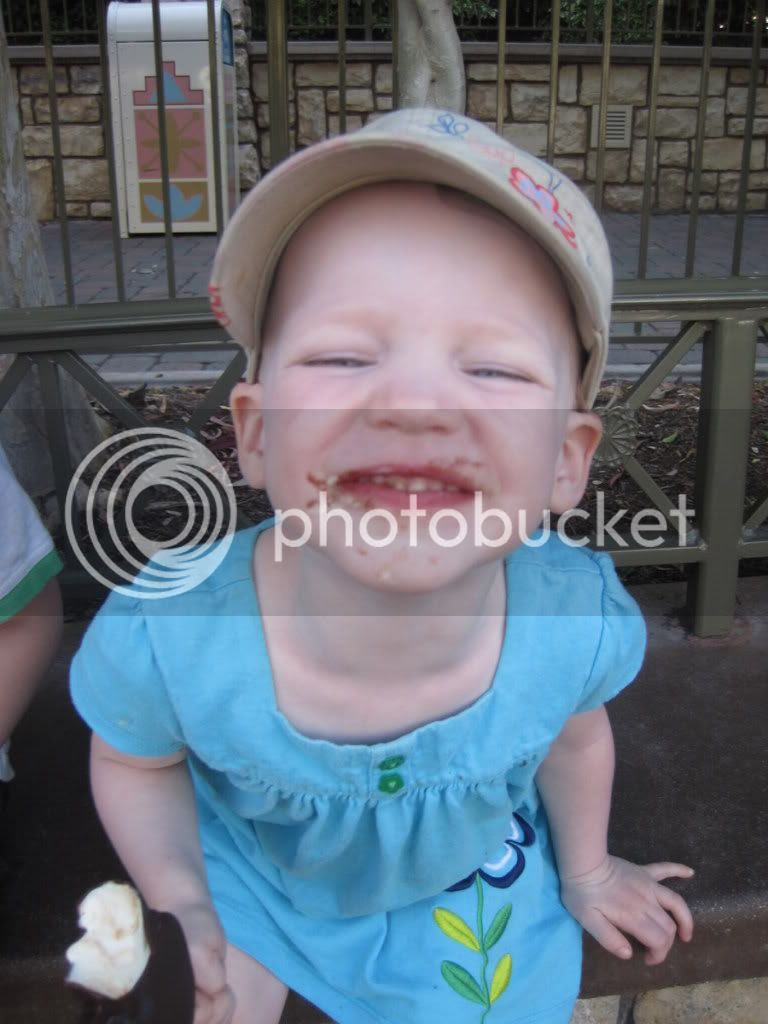 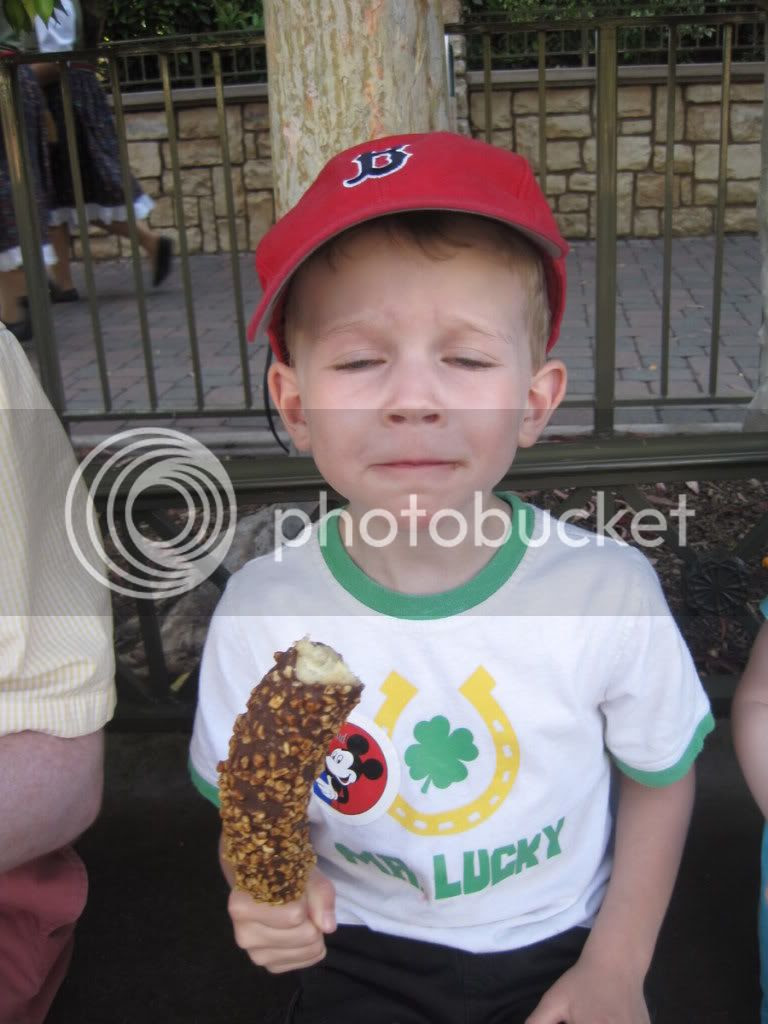 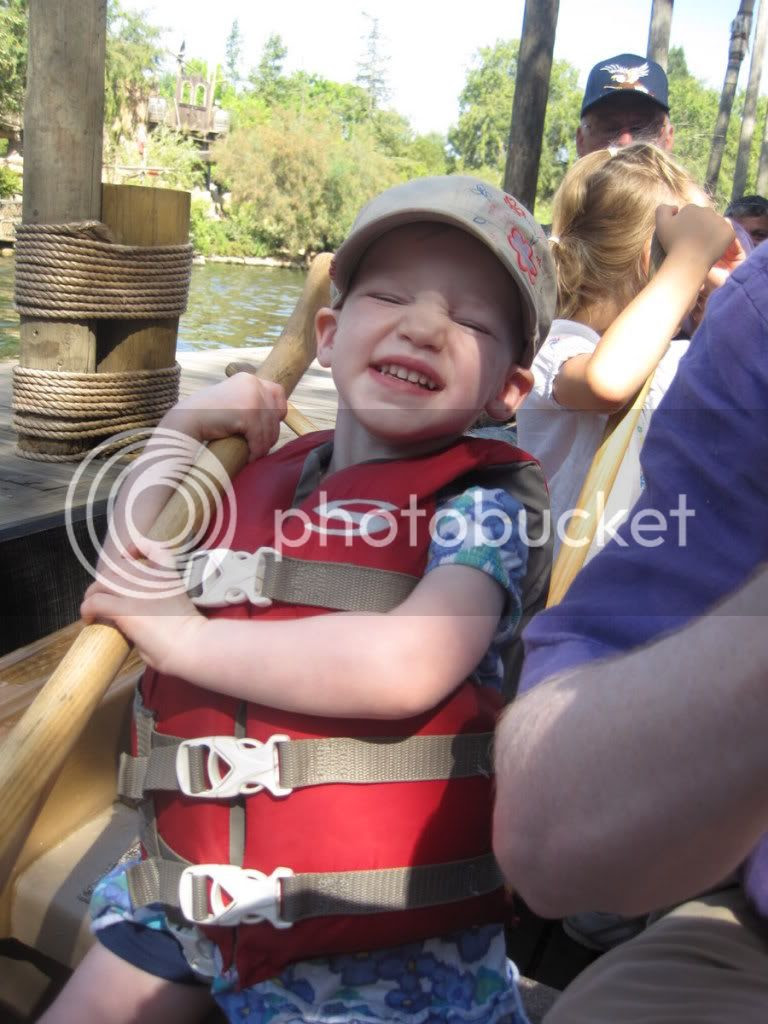 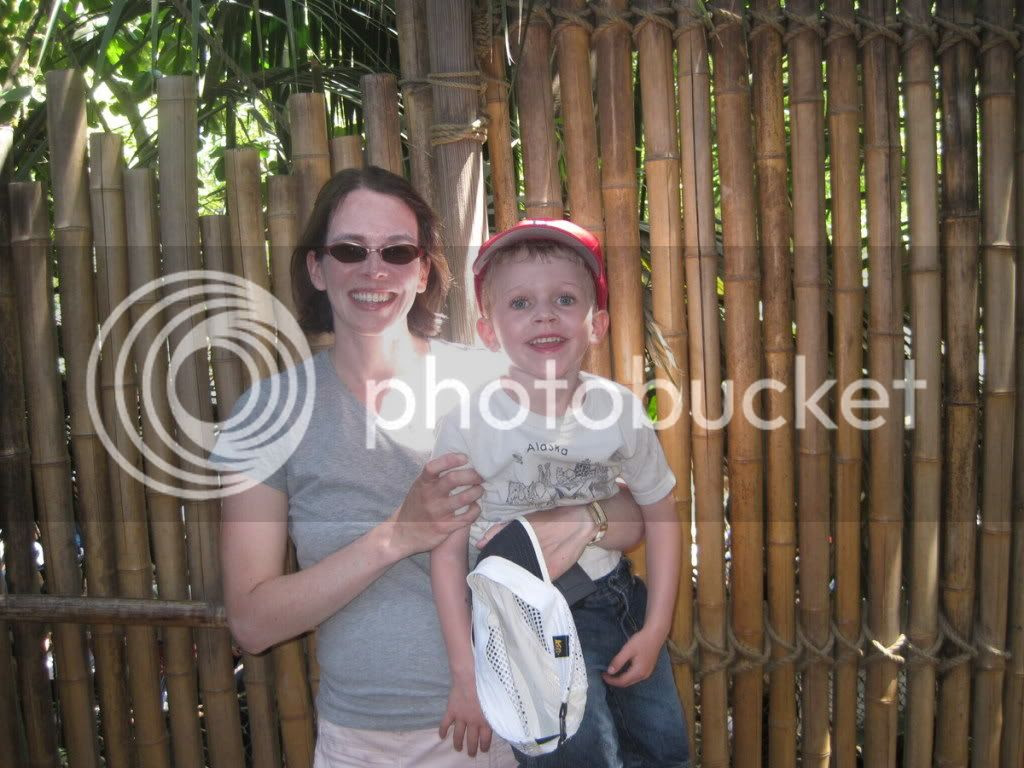 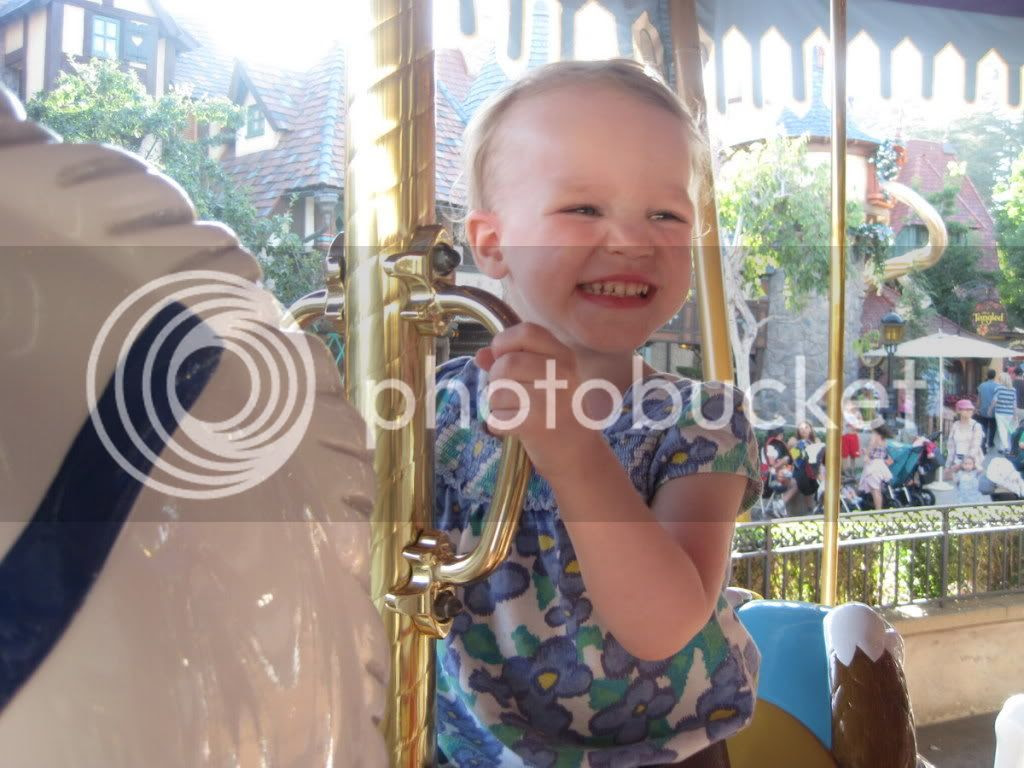 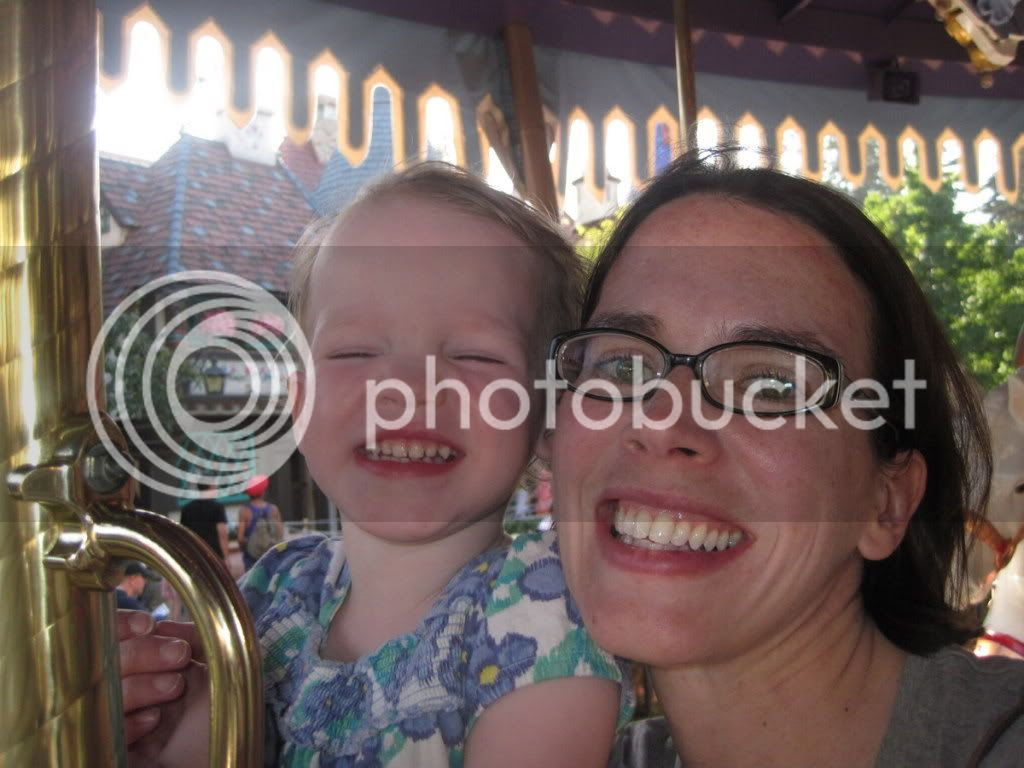 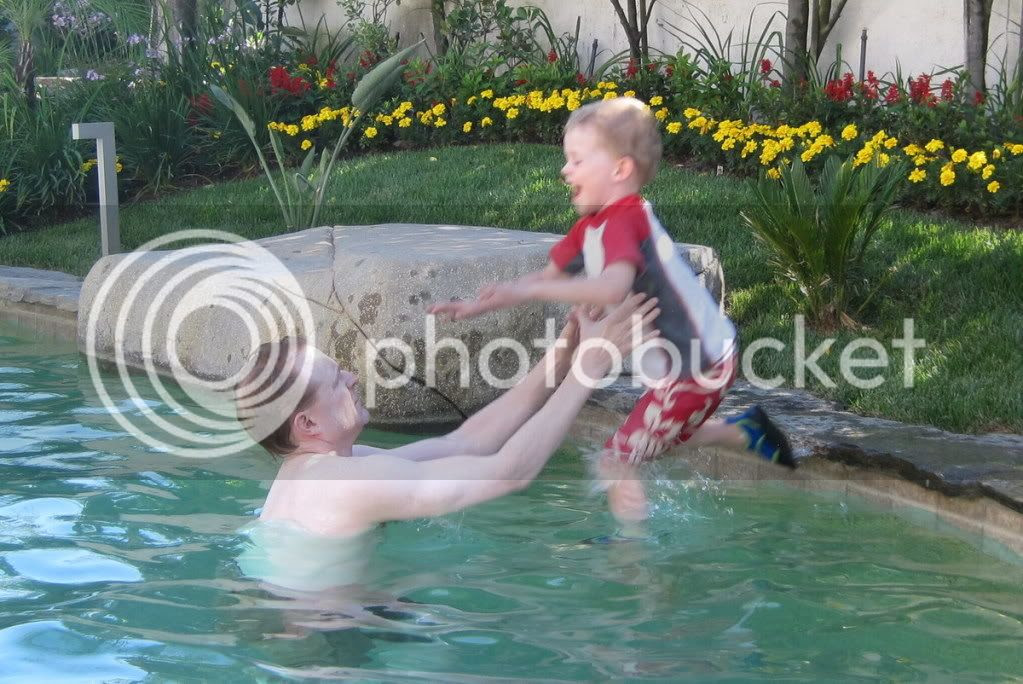 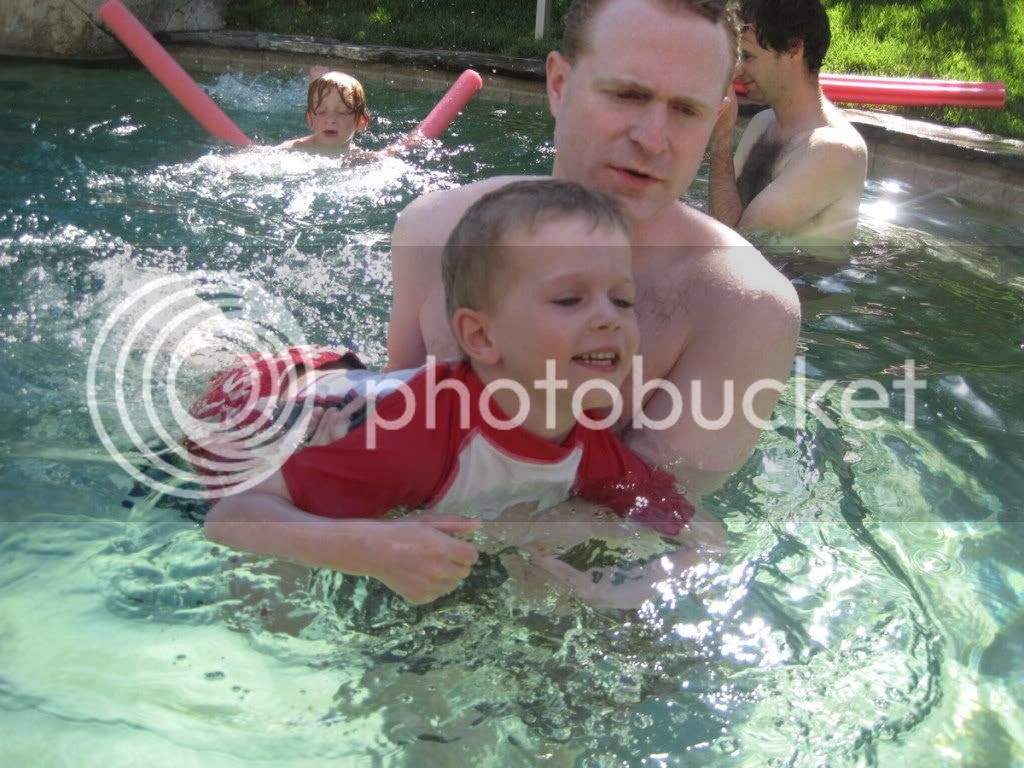 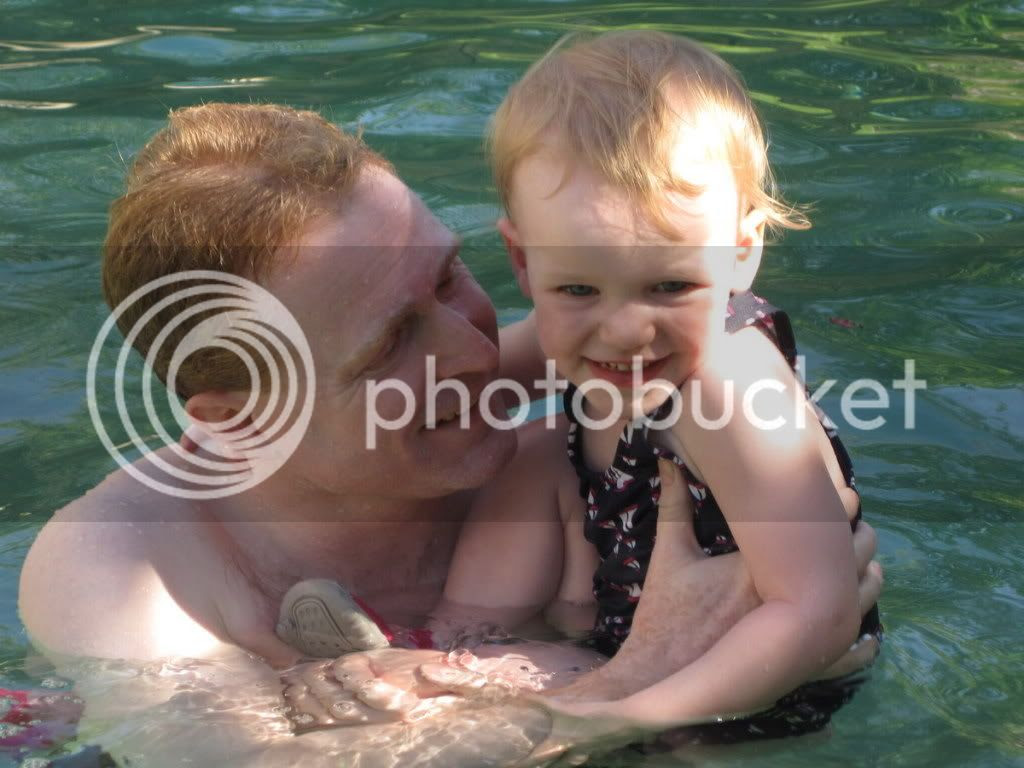 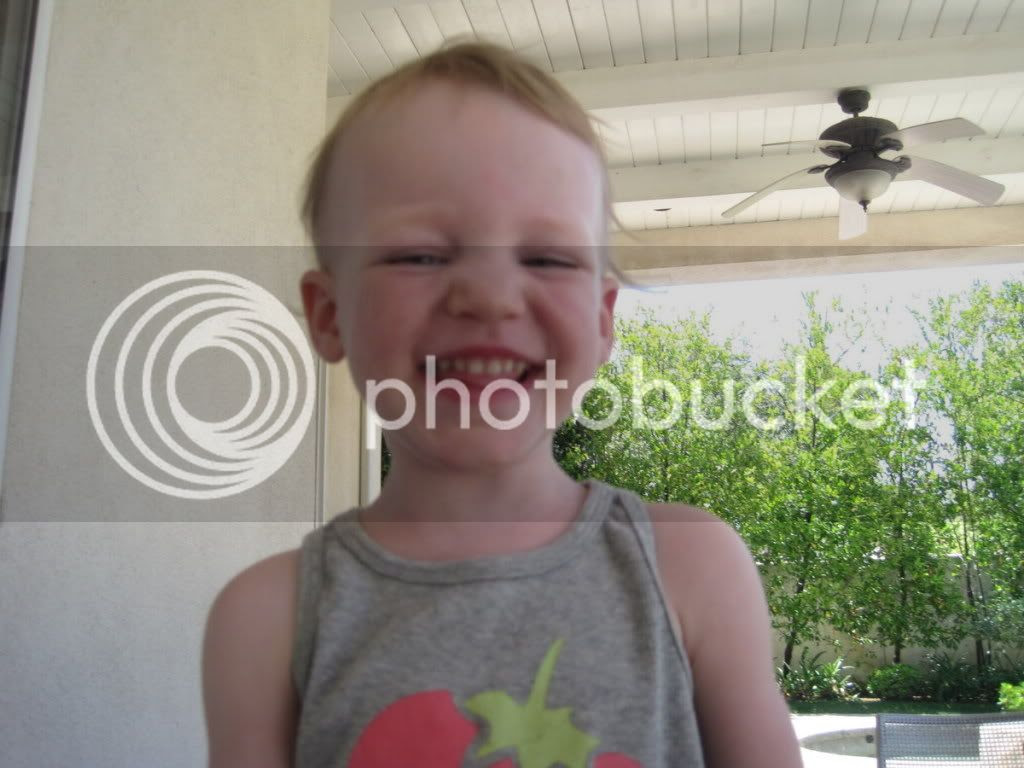 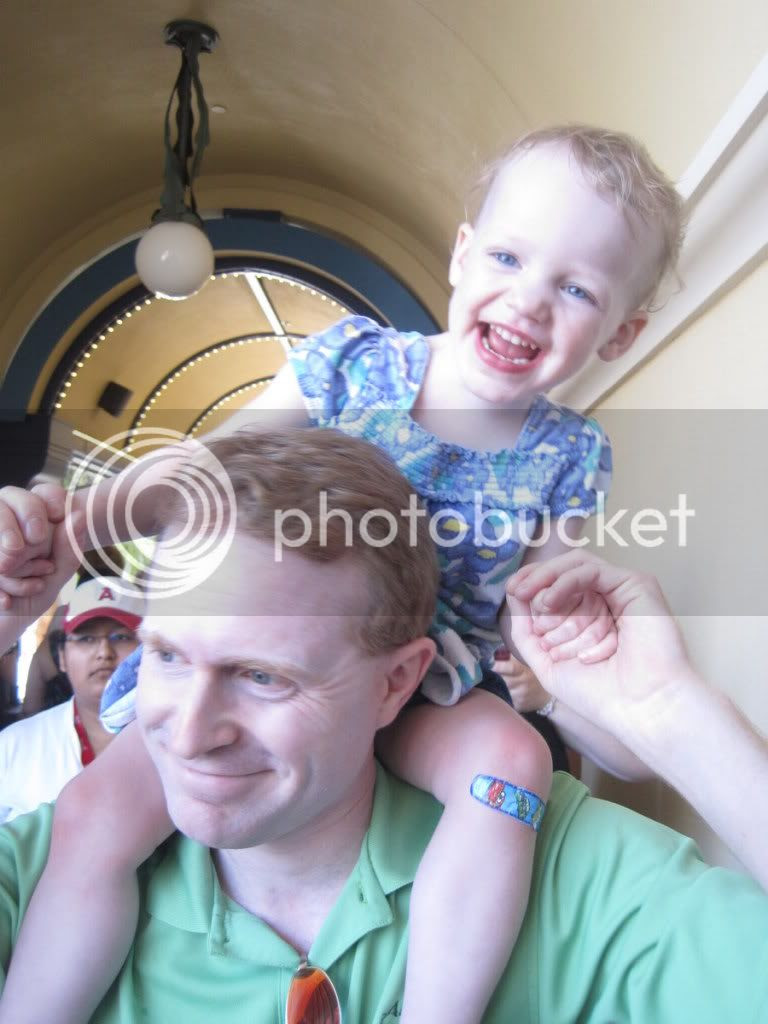 I had been worried that there wouldn’t be anything for Nora to do, but she could do almost everything! Her favorite thing was the Dumbo ride (“I rode effants!”) and her only complaint was that it was way too short, a message she conveyed by screaming and yelling when it was time to get off. Jack’s favorite thing was Splash Mountain, because I seem to have become the mother of someone old enough and tall enough to ride actual roller coasters. Please explain how that happened. Here’s what Nora did while Jack and Andrew rode Splash Mountain: 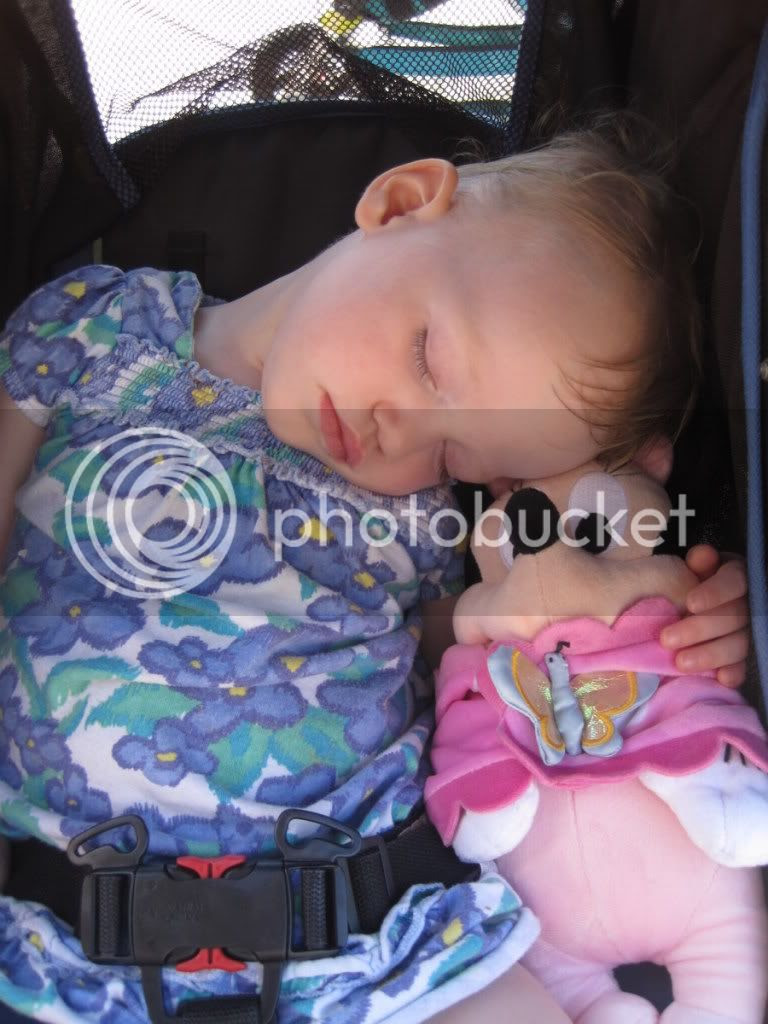 That’s Baby Minnie Mouse, who is Nora’s new favorite character, and whom she calls “Money.” Also, Minnie came with a sort of Velcro swaddling blanket that kept falling off, and Nora would say “I need help!” and then, “She’s very very very very very cold,” as we reswaddled her.

Speaking of Minnie, Nora was typical about meeting the characters. From far away, she was all about giving them hugs, but as soon as we got close she would cry. So we waited for a minute at Mickey’s house but when she lost interest, we left. She insisted upon waiting to meet Minnie, however, so I forced her to go through with the photo. 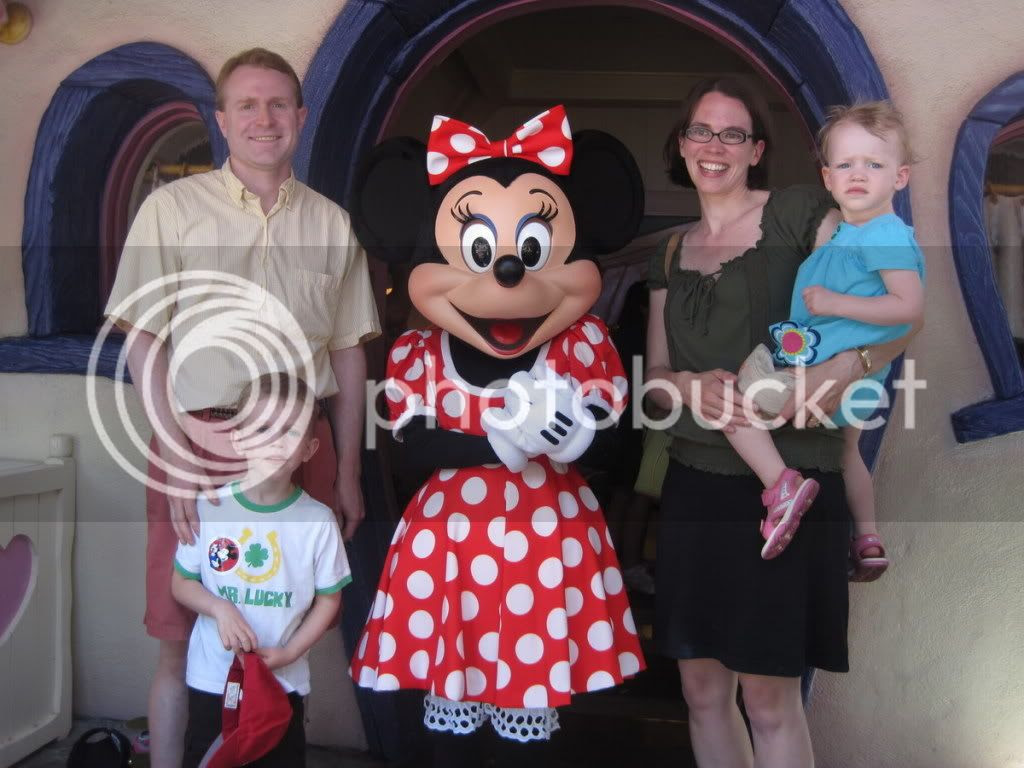 There were, all things considered, minimal tantrums or meltdowns at Disneyland, if you don’t count mine. But I was sick, so it totally doesn’t count. ANYONE would have been grumpy, trust me on this.

The days we weren’t at Disneyland we went to a local science museum, the beach, and a tiny nearby airport to eat lunch and watch the planes take off. Then we went swimming in the backyard pool of my friends’ 35-bedroom home. All told, it was a really fun, fabulous trip. And may I take this opportunity to say that we receive multiple compliments on our well-behaved children on each of the four different flights we took, so we win. (Seriously, the plane rides were easy! EASY! I don’ t know how we got so lucky.)
Posted by Dr. Maureen at 11:03 AM 6 comments:

Email ThisBlogThis!Share to TwitterShare to FacebookShare to Pinterest
Labels: Family

I’ve been reading The Man of Your Dreams by Curtis Sittenfeld. I grabbed it at the library when I saw it because I loved Prep and I am always excited to find an author I know I like at the library since I don’t have lots of shelf-browsing time these days. And yes, I agree that I’d have better luck if I went to the library with a list of books, or, better still, requested them to be held for me, but BLAH BLAH BLAH. I didn’t.

So anyway, I was enjoying the book quite a lot, despite Sittenfeld’s slightly gimmicky use of the present tense and the time-jumping style of the plot. Each chapter started a chunk of time past the end of the previous chapter, and then would become a sort of flashback to the time that was skipped. I was following it pretty well until the main character, Hannah, was talking to her cousin Fig’s boyfriend in the car while they were on the way to pick up Fig. It was all going well, but then Sittenfeld started referring to things that I could swear had not been explained, like Fig’s and Hannah’s trip to L.A., or Hannah’s dinner with her father. It seemed to fit in with the flashback-style of the book; I assumed she was planning to reveal things later. Nevertheless, I was feeling kind of grumpy about it, because it was just too jumpy. I mean, come on, Sittenfeld. Get it together.

And then, as I was approaching the end of the story, I realized that I had inadvertently skipped some of the book. Sort of a lot, actually. It turned out to be pages 48-160. I just didn’t read them. So, yeah. The plot seemed a bit jumpy. It was a lot like falling asleep in the middle of a movie, the key difference being that a movie keeps going without you, so it makes sense that you would miss a chunk. This… was different.

How did this happen? Well first of all, I usually don’t use bookmarks, I just look at the page number and try to remember it, and then flip through until I find my spot. Second of all, I can’t remember characters’ names. At least for the most part. I remembered Fig’s name, because it’s Fig. And when I “fell asleep”, Hannah was talking to Fig’s boyfriend about Fig; when I “woke up,” Hannah was talking to her OWN boyfriend about Fig. Fig’s boyfriend was named Henry, Hannah’s boyfriend was named Mike. Both fairly generic. And a particularly salient point is that Hannah had a crush on Henry, so when we skipped ahead, I just thought that Sittenfeld was planning to explain later how Hannah ended up with Henry, whose name I thought was Mike.

Does any of that make sense? It doesn’t really matter, because it’s not really an excuse, seeing as I read about 100 pages of a book without realizing that I had completely skipped the middle third of the story. Instead, I blamed the author for writing something so incoherent. I don’t really know what this says about me, but I will say that when I went back and read it in order, the plot made a whole lot more sense.

Sittenfeld, you have my apologies.
Posted by Dr. Maureen at 11:14 AM 5 comments:

Well this is convenient

Yesterday, Jack was rooting through the silverware drawer while I prepped for dinner. (I made this crockpot breakfast casserole. I am told it was good, but I certainly couldn’t eat it. I couldn’t even go near it as I very unwisely included broccoli. Here’s a helpful tip: If you start to feel nauseated round about 3:00 most days, it is perhaps not the best idea to cook broccoli in the crockpot from 3:00-5:00. We played outside from 4:00 on or so, and when we came back inside the stench of overcooked broccoli almost killed me dead. In fact, I have to stop even typing about it right now. Blergh.)

Let’s start over: Jack was rooting through the silverware drawer and came across a baby spoon, but a particularly annoyingly shaped baby spoon that doesn’t fit in the drawer very well. We used to have two, in fact, but I think I threw one out. Jack was fascinated by it, and when I told him it was a practice spoon for babies, he said, “We should have another baby.”

Well that caught my attention. We have not yet shared our good news with Jack, but I figured this was a golden opportunity not to be wasted. “Would you really like to have another baby come live here, Jack?” I asked him.
“Yeah!” he said.

“Because they’re so cute, right?” I was concerned that he was mainly interested in seeing the baby spoon in use, so I wanted to check.

“Yeah, they are,” he replied. “We should have lots of babies.”

“How many babies do you want, Jack?”

“Five or six, huh? I said. “Do want them to come all at once, or do you want to have one every couple of years?”

Jack considered this, and then said, “One every couple of years, because we only have one of these baby spoons.”