So Nora is in the throes of giving up her morning nap in exchange for a long afternoon nap. It’s been going on for years now, but I recently made the mental adjustment of no longer expecting two naps. IF she goes down in the morning, I now EXPECT her to be up again in 30-45 minutes. This has made all the difference in my mood. I made the adjustment JUST IN TIME, because mornings that go by with no nap at all are now happening with increasing frequency. But since she’s still getting up for the day at about 5:15 and I’m making her wait for her nap until 11:30 or 12:00, AND I insist that she eat lunch first, we get this: 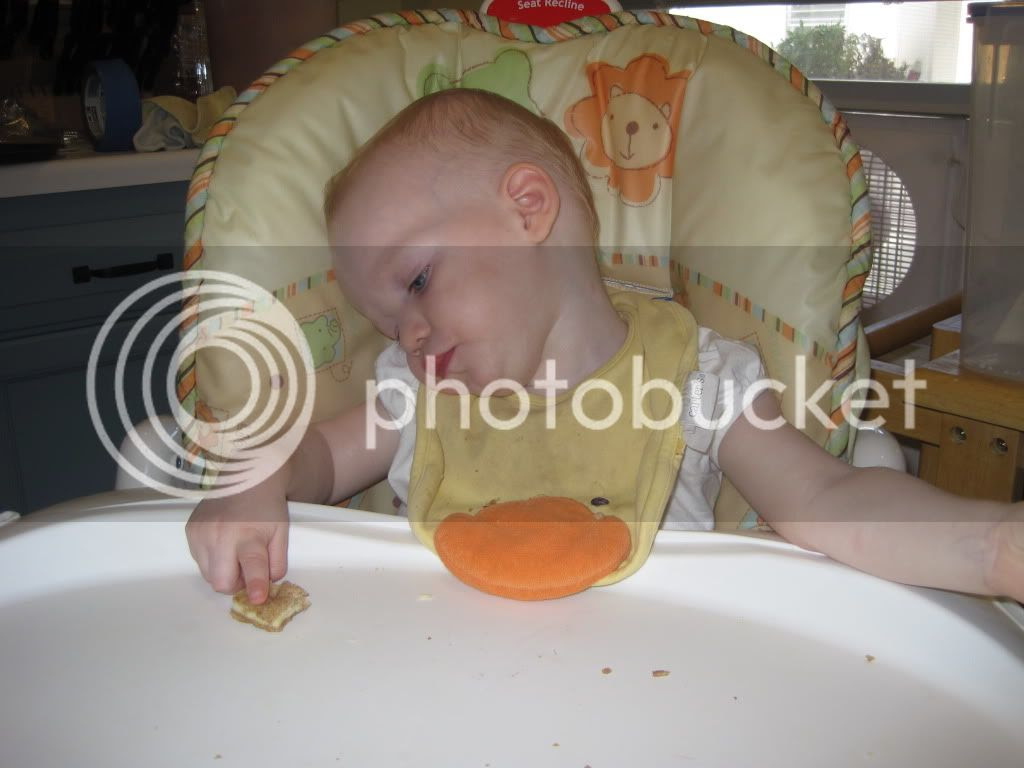 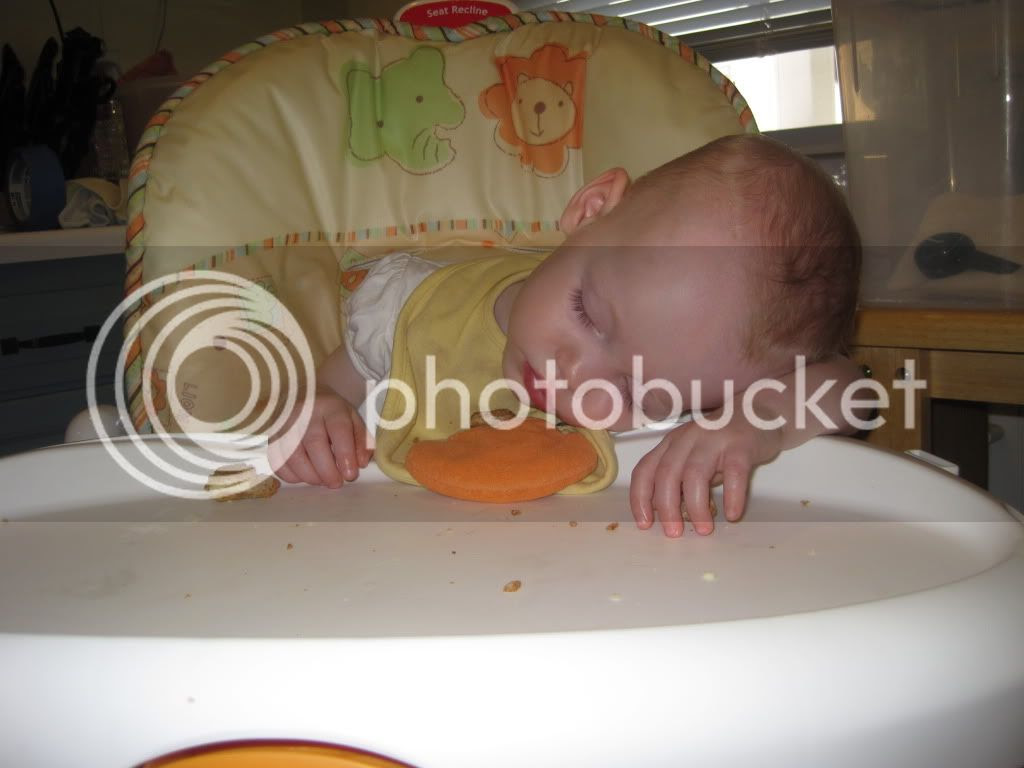 Sleepy Nora from Maureen on Vimeo.

In other news, when I uploaded the photos from my camera to the computer, I discovered that someone may possibly have been taking pictures without my permission. 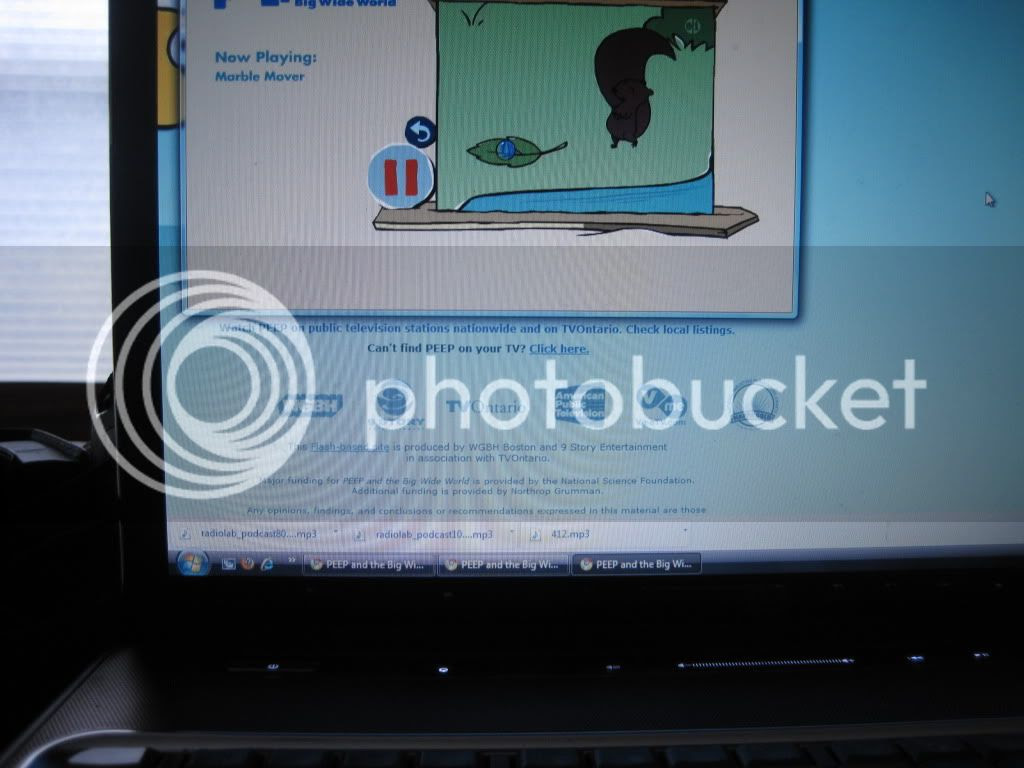 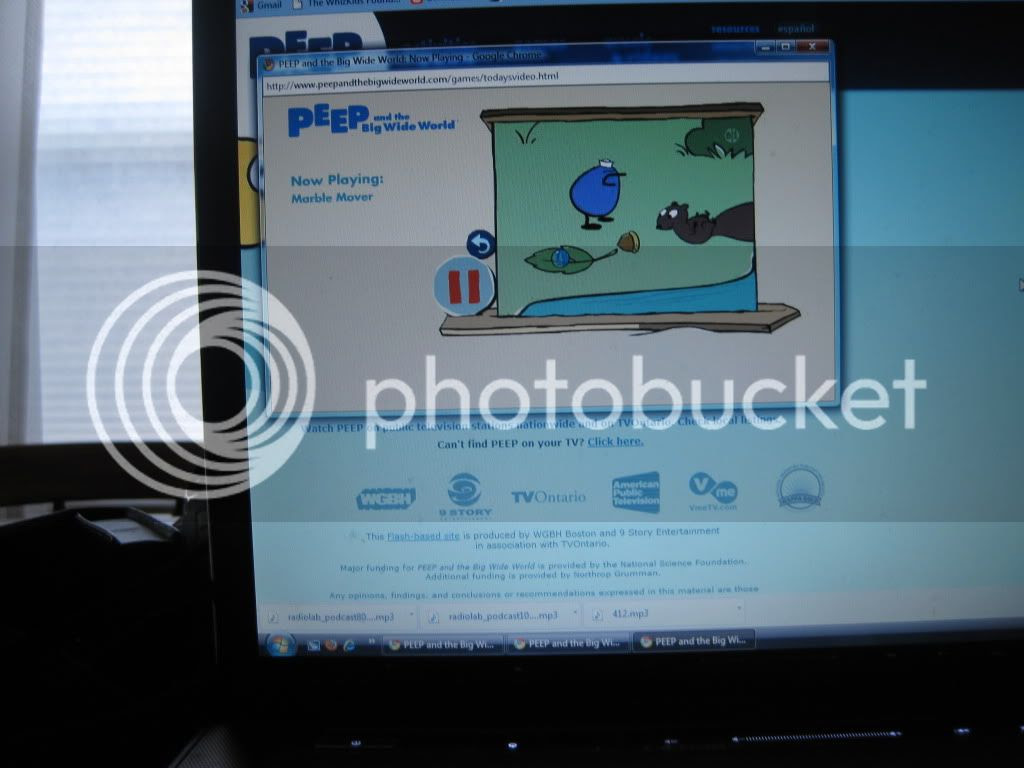 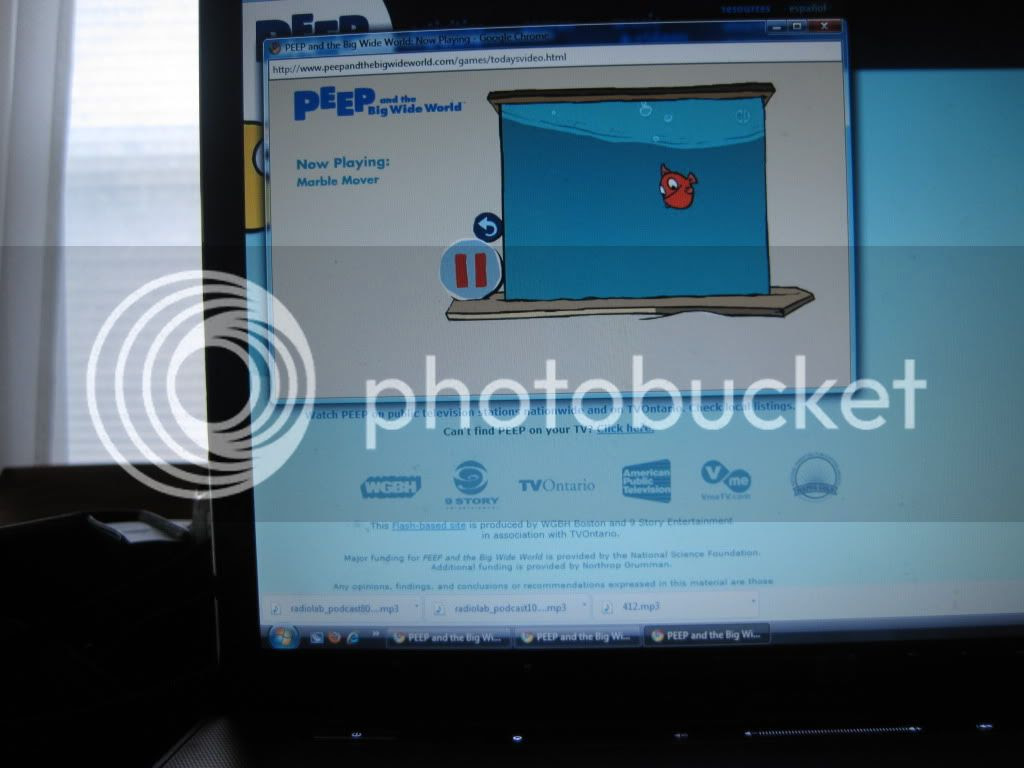 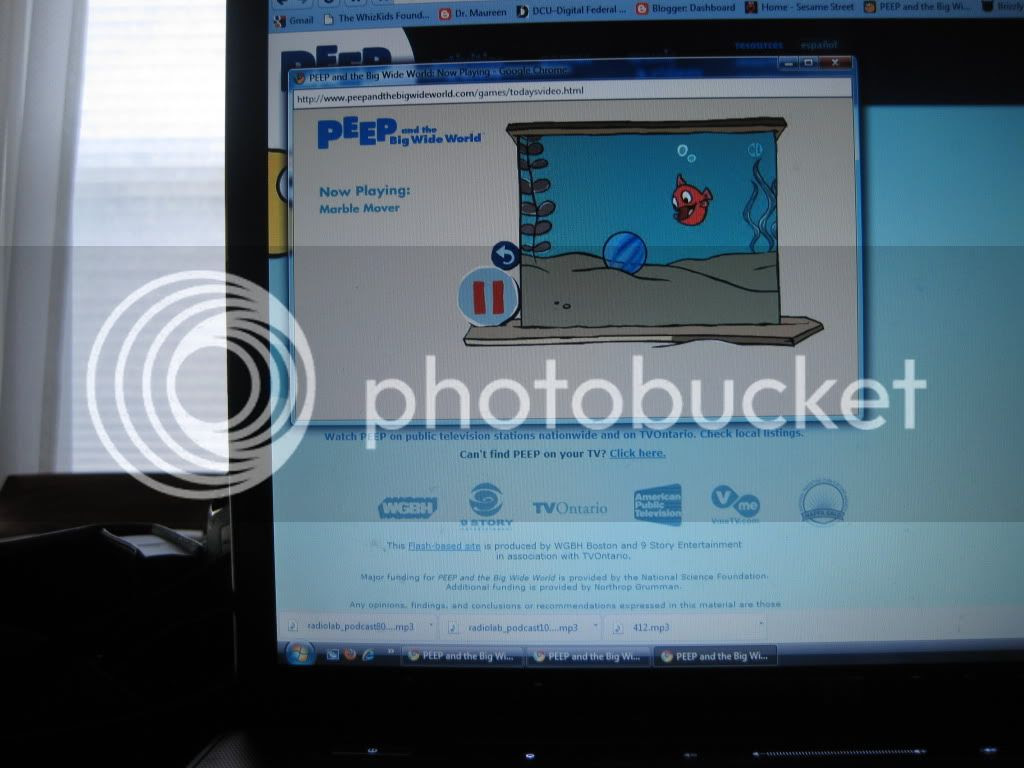 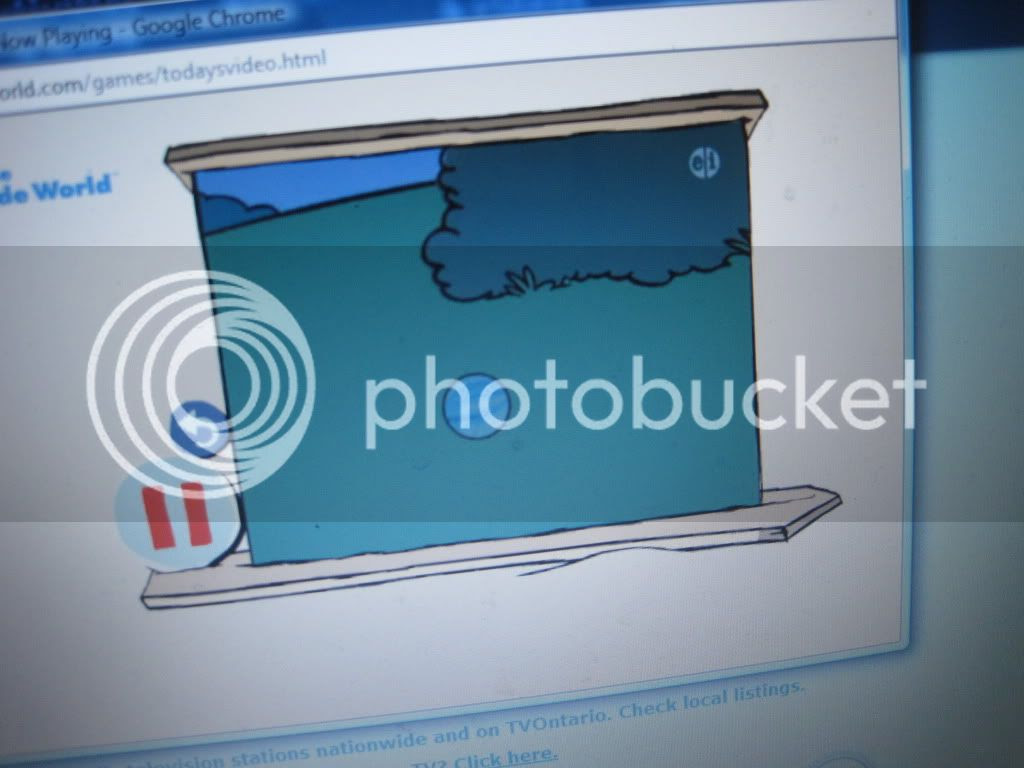 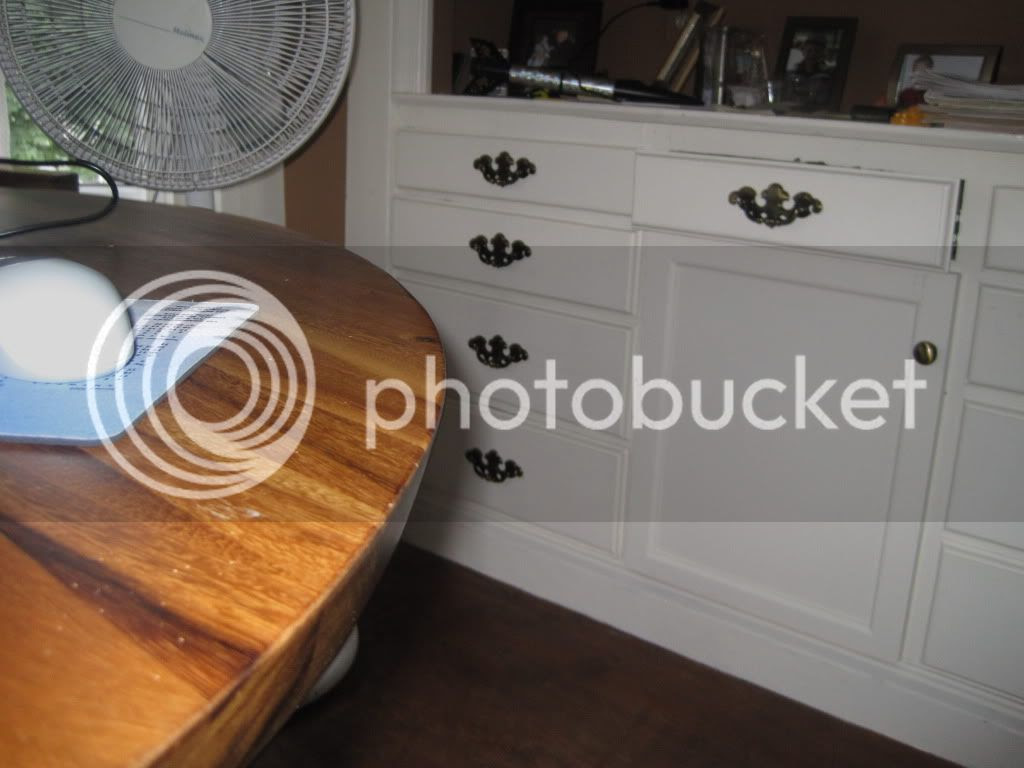 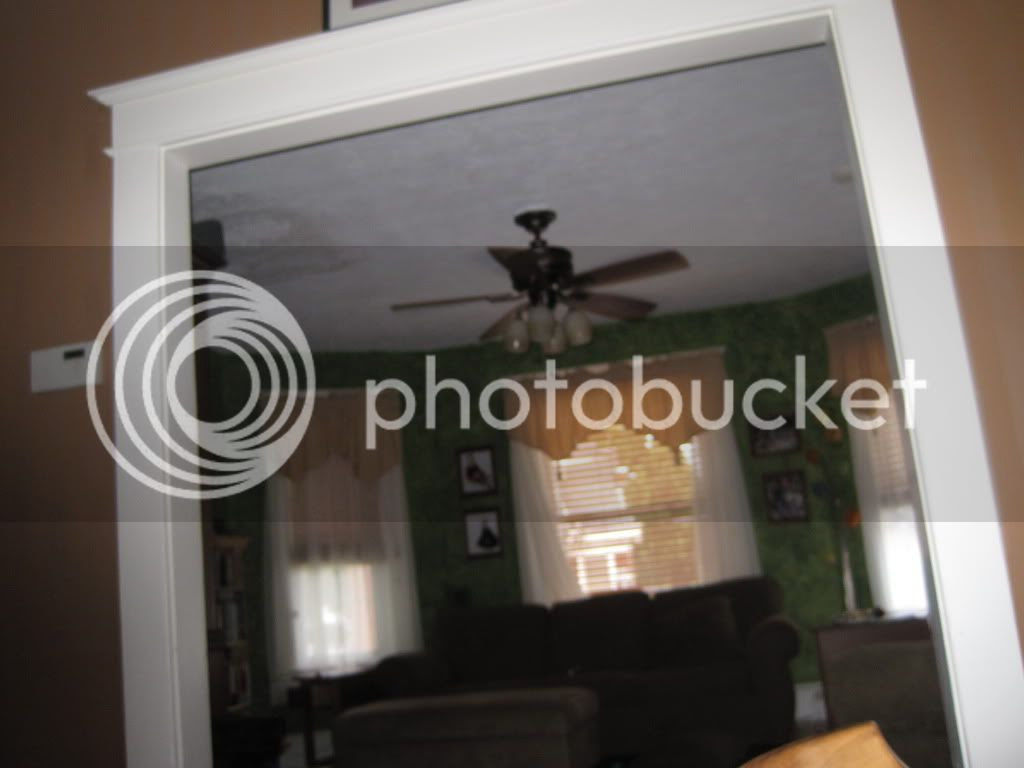 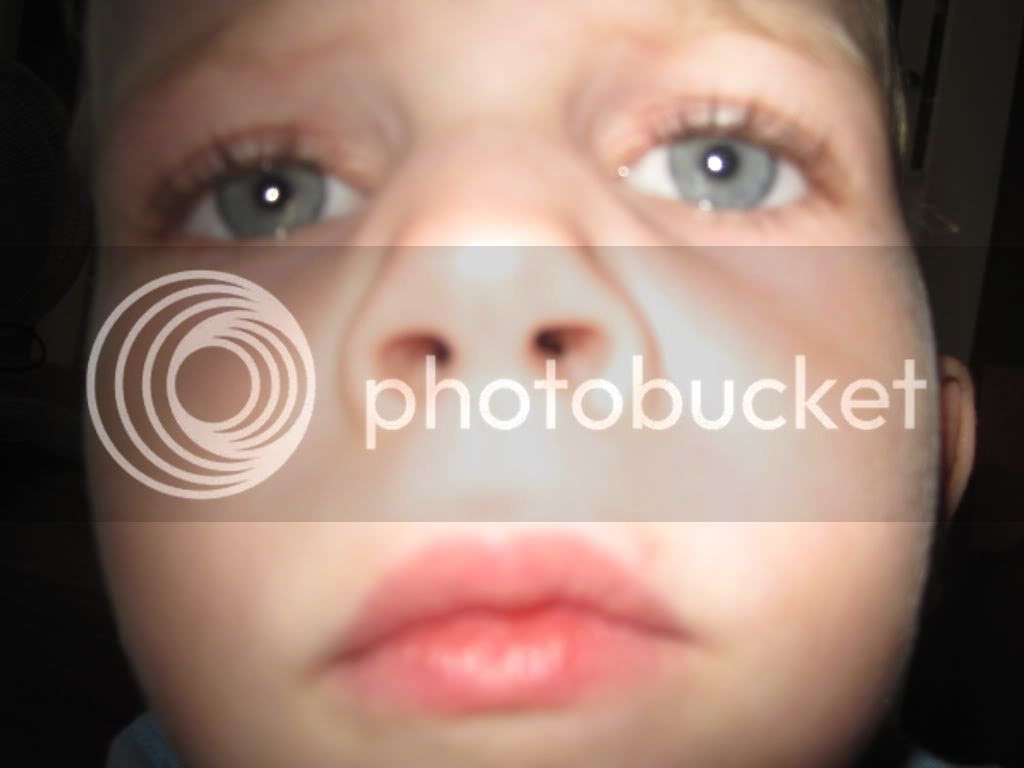 In other other news, today was a gorgeous, crystal clear, windy day, just perfect for flying a kite. Sadly, the kite turned out to be missing a crossbar and was un-flyable, but we didn't yet know that. 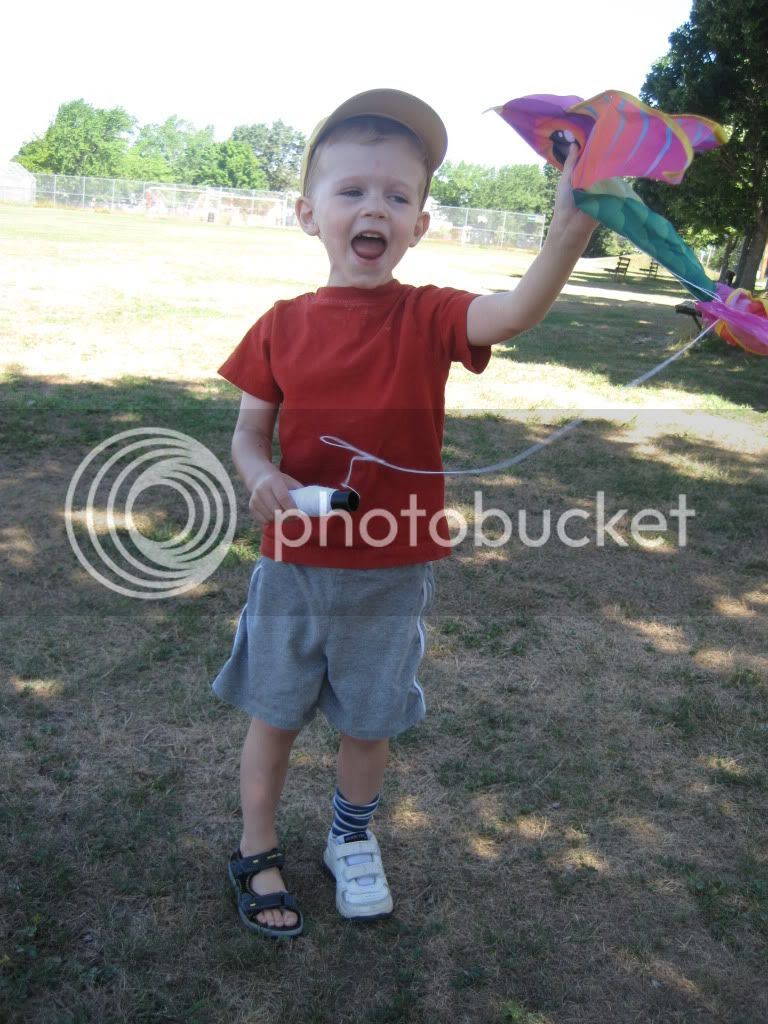 Jack got his own self dressed today. The shirt is backwards by accident, but the shoes are by design.
Posted by Dr. Maureen at 9:28 PM 2 comments:

Jack, Andrew, and the bulk of my siblings, nieces and nephews went to a minor-league baseball game on Sunday. Andrew, Jack, my brother and his four-year-old daughter were early, and the kids were rewarded with the chance to run the bases against the team mascots in the second inning. Andrew taped it.

Jack running the bases from Maureen on Vimeo.

Jack doesn't quite understand the rules of baseball, but he's pretty fast, eh?
Posted by Dr. Maureen at 9:00 AM 1 comment:

Today was a very, very long day. Well, afternoon. It was a long afternoon. This was not a shock, because Nora was up last night from 1am to 5am, and Jack has some intestinal issues requiring a diet of bananas, rice, applesauce and toast. And we are STICKING to this diet, my friends, because we are most definitely not going to have a repeat of the 10-day-long ordeal of last February. (Ten horrible days, complete with sample collecting by yours truly and a bathroom rug casualty.) But it’s a tough one, because he’s hungry, and there are only so many ways you can present bananas, Rice Krispies, applesauce and toast. (I’ll tell you what, though, Andrew suggested a “banana hot dog” by which he meant a banana wrapped in bread, but which Jack took to mean a banana dipped in ketchup and that is what he ate and he LIKED IT.) So it’s not as though I woke up this morning and thought, “Today is going to be a great day!”

The mental readjustment got me through the morning relatively unscathed. I was lenient with the TV time, and I have actually stopped expecting a morning nap to last longer than thirty minutes, assuming it takes place at all. The lowering of expectations counts for a lot in the mental health of a stay-at-home parent, believe me. But I hit a wall around 2:30, which is when I ran out of both patience and ideas for entertainment. Not-coincidentally, this is also when Nora woke up from her afternoon nap and is when I discovered that my brilliant idea of allowing Jack to float things in a pan of water on the kitchen floor was not so smart, but only because I used the aluminum cake pan that Nora’s birthday cake came in. Friendly tip: Don’t fill a flimsy aluminum half-sheet cake pan with water and then try to pick it up. Trust me. In related news, those pans hold a lot of water.

The afternoon just turned into one of those days where things just kept going wrong. Water all over the floor. Several times. Juice all over the floor. Various other sticky things all over the floor. Laundry piling up. Whining, clinging, biting pre-toddlers demanding attention when all I need is five minutes to take a shower without someone pulling back the shower curtain and causing water to run all over the floor. Poor Andrew got one of my infamous afternoon phone calls where I cry and tell him how miserable I am, and then, just when I’ve got him feeling good and guilty, the baby starts shrieking and I say, “I have to go,” in a dead monotone and hang up on him.

But there were bright spots. And those are the spots I’ll probably remember in a few years. Spots like the impromptu tea party we all had in the living room with Nora’s new tea set, several dollies, Jack, and me. Spots like playing soccer with Jack in the back yard. And spots like the jelly sandwich I gave Nora for lunch. 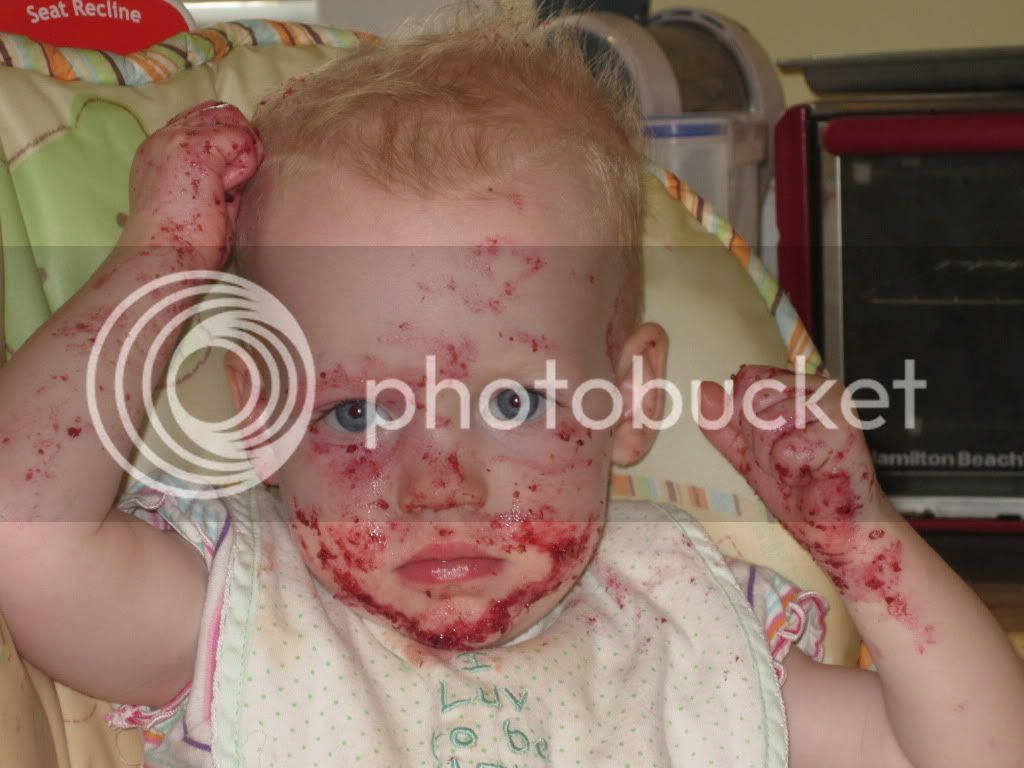 Nora, you have a little something on your face

Speaking of Nora, would you like to know why I have to make sure she always wears a onesie? 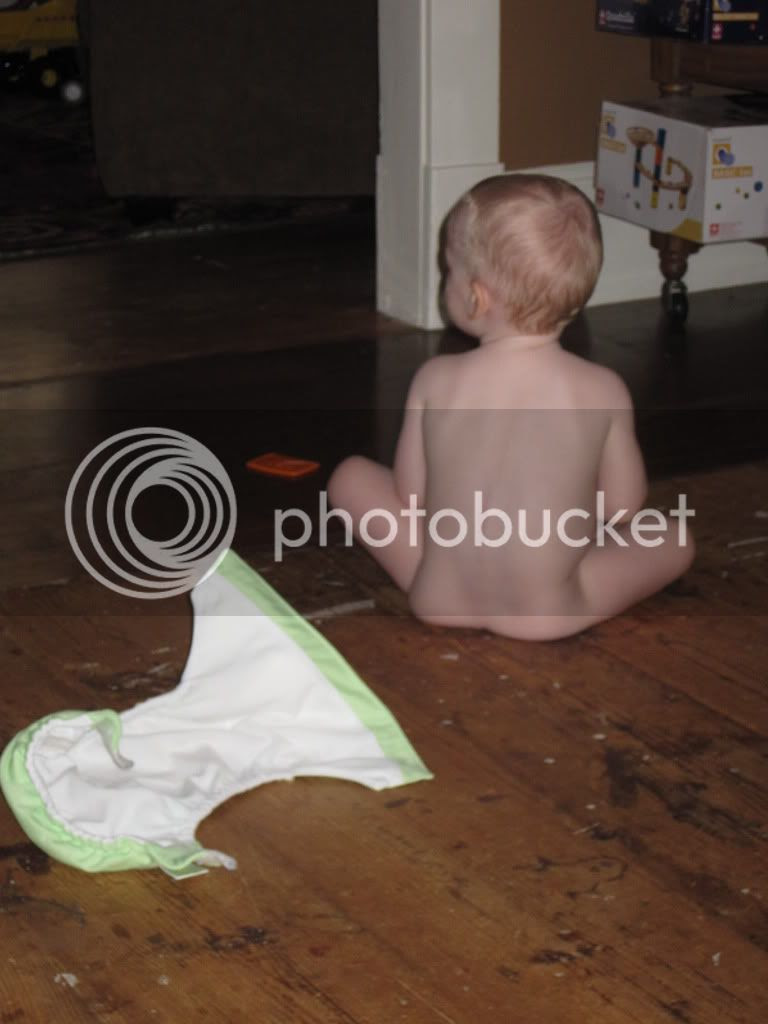 So babies cry when they're hungry, eh?

Then we got home and she consumed four ounces of water, three of four slices of cucumber, a scrambled egg with cheese, a handful of cherries, and two huge chunks of tomato. She washed it all down with some milk.

Hey, there, Internet. Were you wondering where I was all last week? No? Well, I didn’t miss you either. Nyah. Because we went on vacation! It was a secret vacation, because Consumer Reports told me not to tell the internet if I was going away because it’s like saying, “Hey, robbers! Come to my house! It will be empty!” Except now that I think of it, I may as well have told you as the house was not, in fact, empty all week because the tile guy was here. He was cleaning the grout, re-caulking the tub, and switching out a few tiles for us that were damaged. It was supposed to take him a day, maybe two, but we are idiots and forgot to leave the tiles out for him which made it challenging for him to switch out the damaged ones. He tried to call us, but our cell phone reception was surprisingly bad, so we didn’t get the message until we were on our way home. Fortunately, he colluded with the neighbor who had agreed to water our plants, and they braved a trip to the billion-degree attic to find the tiles. So he did manage to finish, but it took him all week. And our caulking is no longer a biohazard! This is so thrilling to me, I can’t tell you.

Speaking of the billion-degree attic, I had to go up there myself yesterday to put away the down comforter, because just the sight of it in heat like this is enough to make me feel ill. On the way up, I saw something out of the corner of my eye on the bottom step that I thought was a hammer or wrench or some such. On the way back down, I got a better look. You want to know what it was? You don’t, but I’m going to tell you anyway. It was a dead bird. A DEAD BIRD. We have some sparrows nesting in our gutter. We are aware this is bad, but we figured we’d let them finish out the season and then seal it up for next year rather than pull down the nest full of babies. So my theory is that the bird got through the flashing or something into the attic, couldn’t get out, and dropped dead from the heat. I didn’t step on it, but I am still fairly traumatized.

And now is the part of the blog wherein I force you to look at my vacation photos. We rented a cabin on a small lake with one of my sisters and her family, and we got to go for a week. A whole week! We haven’t had a week’s vacation in over four years, so we were giddy with excitement. And it was awesome. AWESOME. My only worry had been that Nora wouldn’t sleep, but she did! Not through the night or anything, but she gave us the critical few hours between her bedtime and our bedtime, and that is all I wanted. Plus, vacationing with my sister’s family ensured that we didn’t get sick of each other and also that there were enough adults there to give both Andrew and me legitimate time off. I spent one afternoon just reading on the beach. And I got to go running as much as I wanted.

Other highlights include a trip to a little kids’ amusement park, a motorboat ride (Nora: not so much a fan), and a day of swimming with a bunch of cousins. We checked a lot of things off Jack’s life list last week. 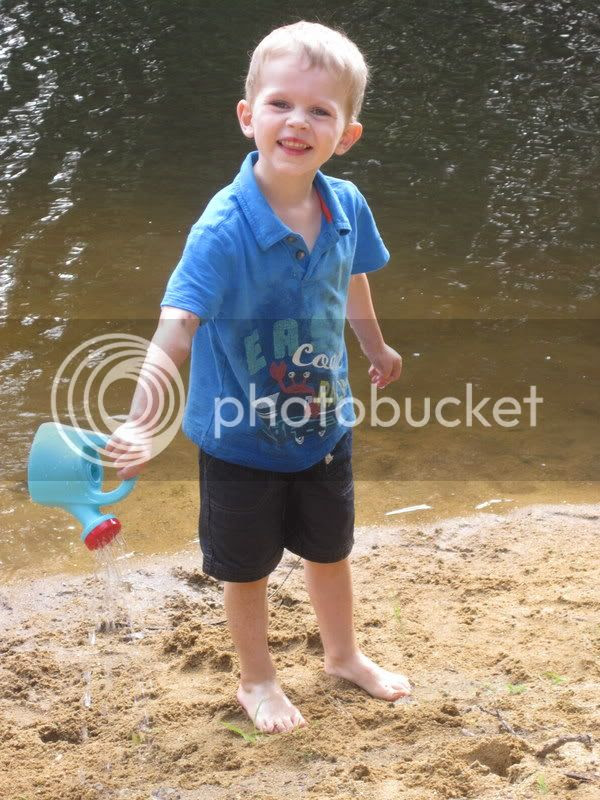 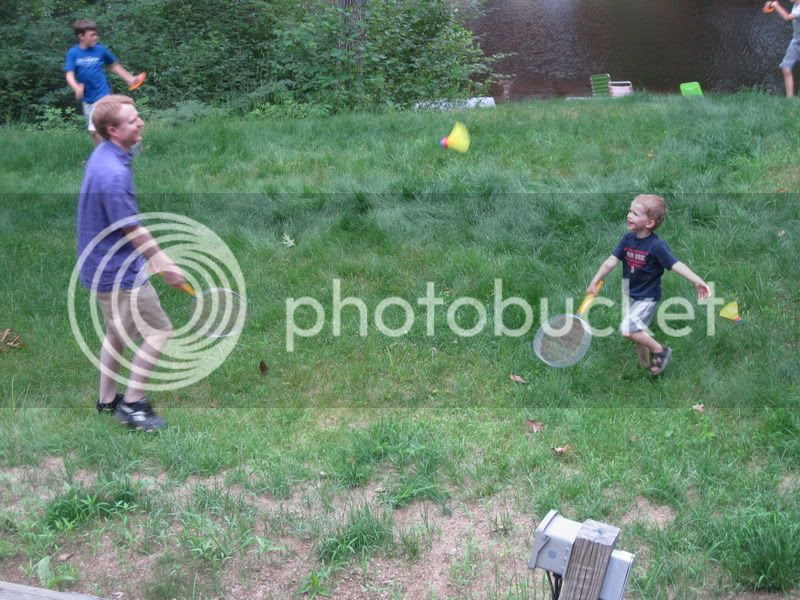 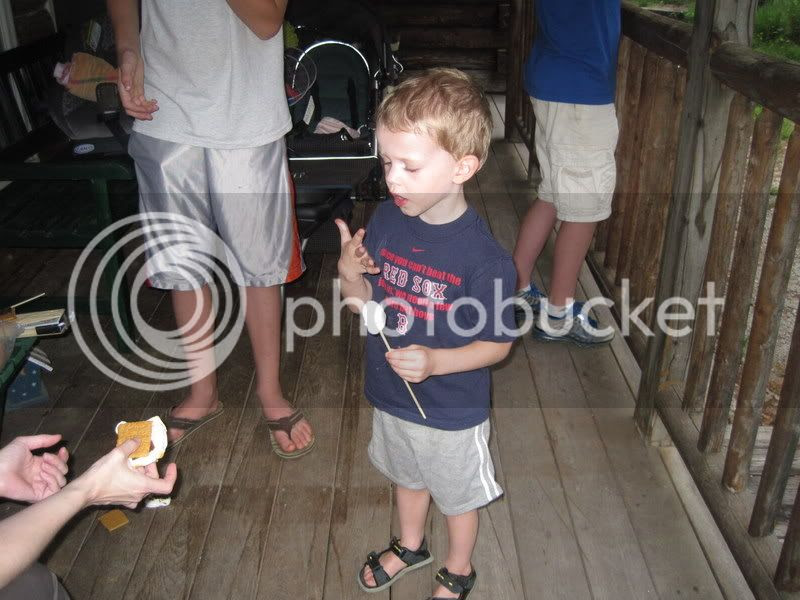 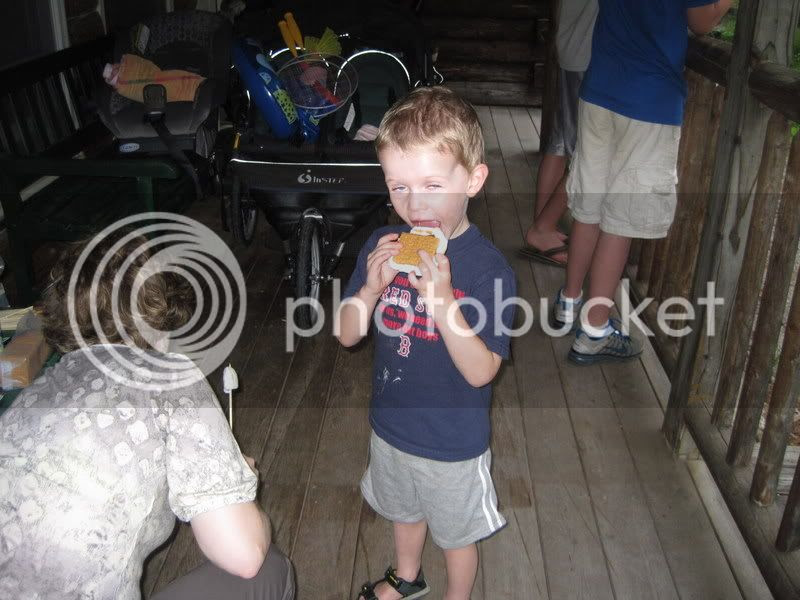 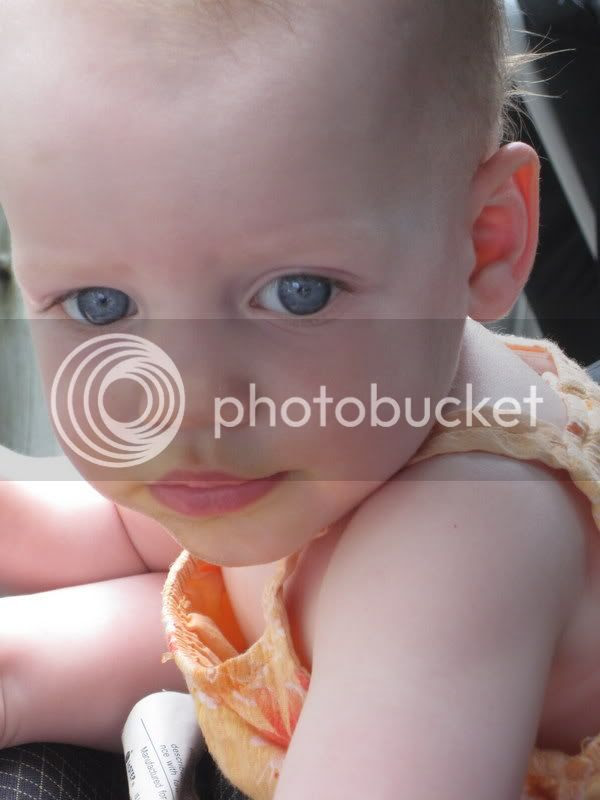 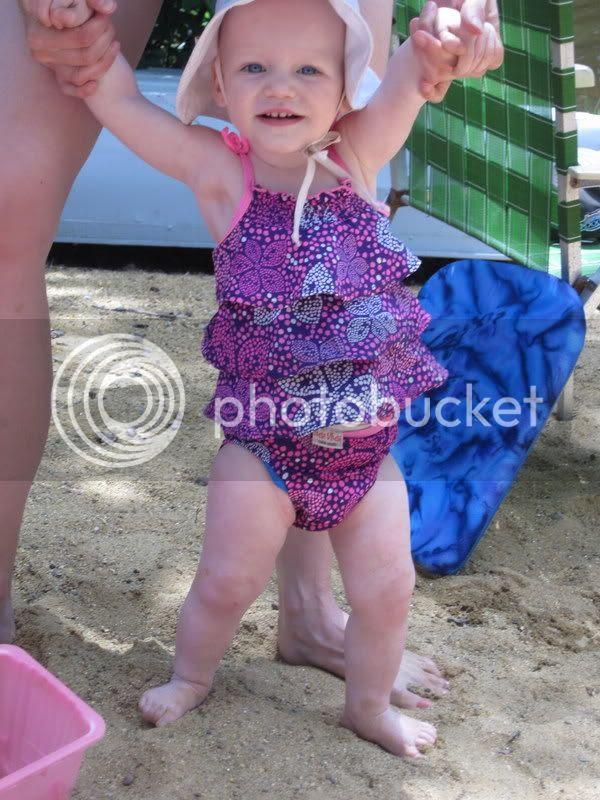 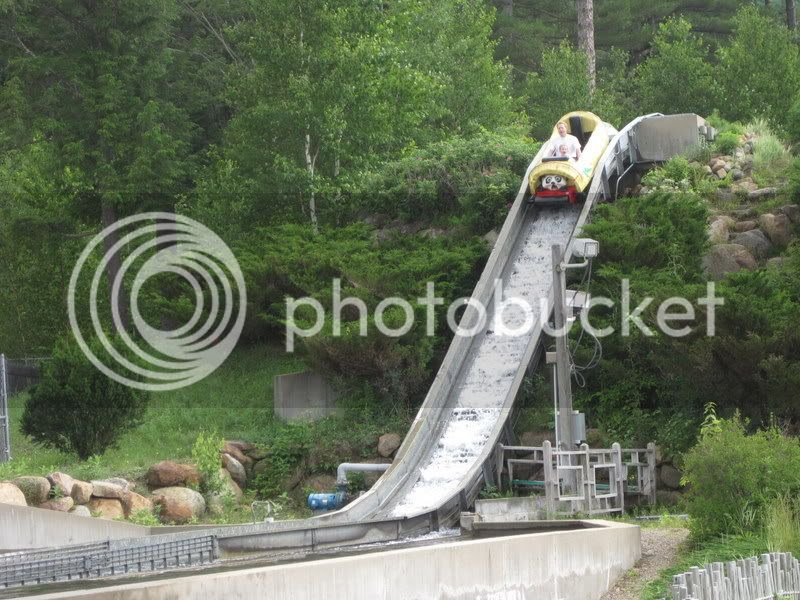 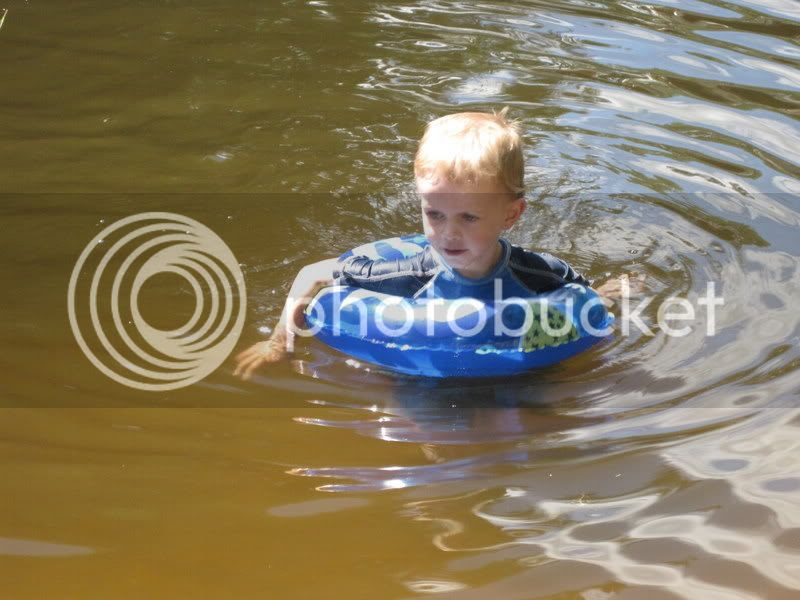 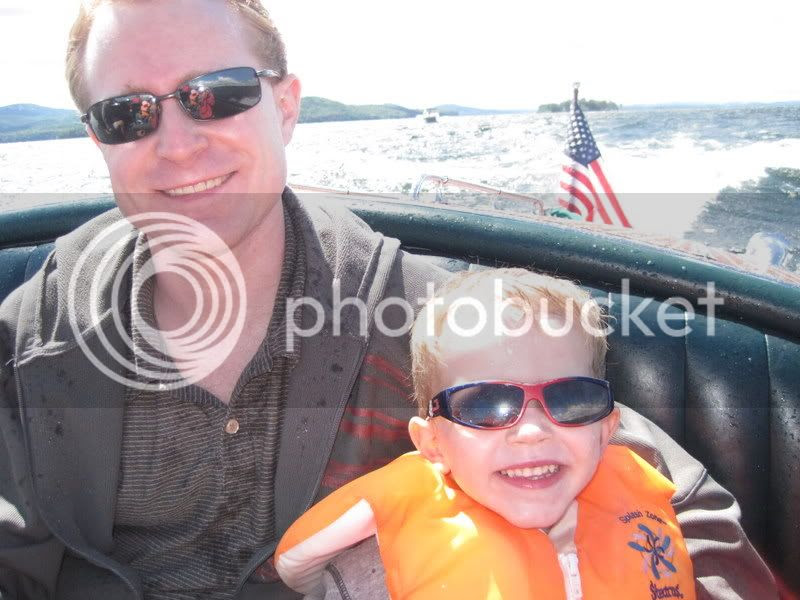 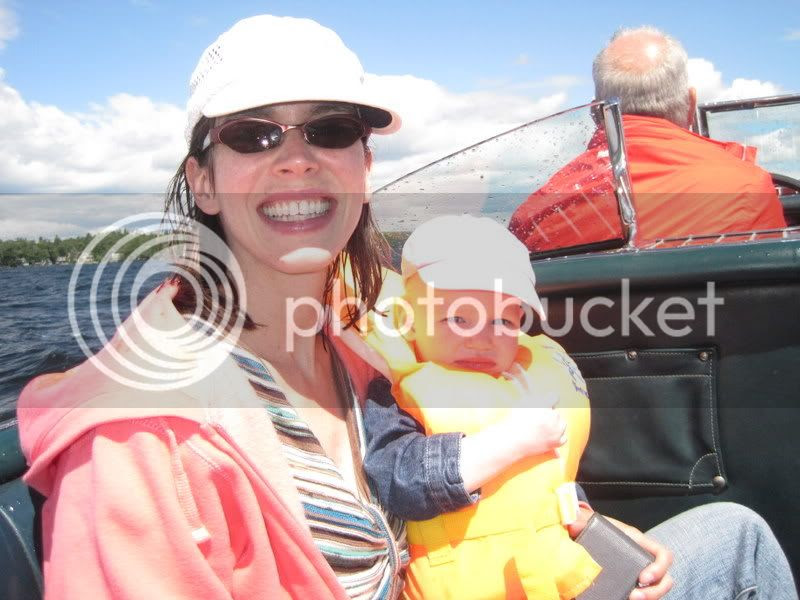 Why are you making me wear this enormous orange torture device? And I am getting WET. DO NOT LIKE. 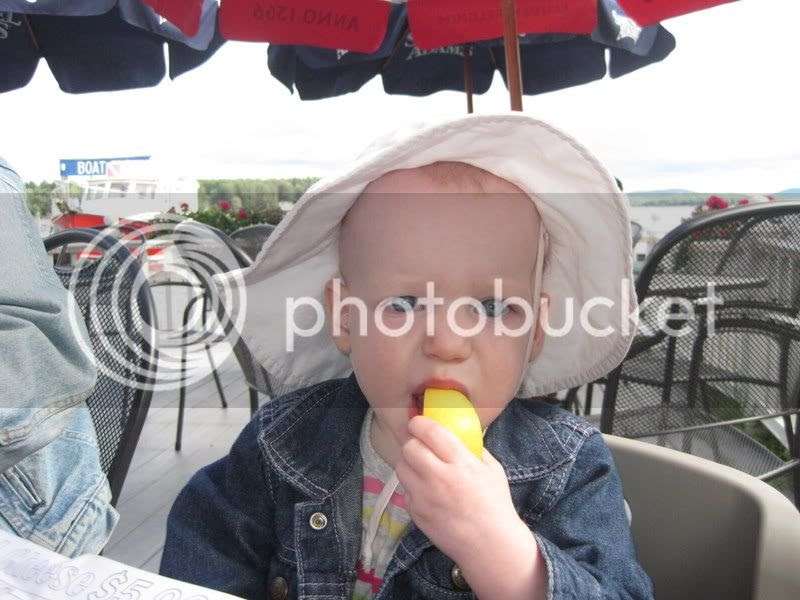 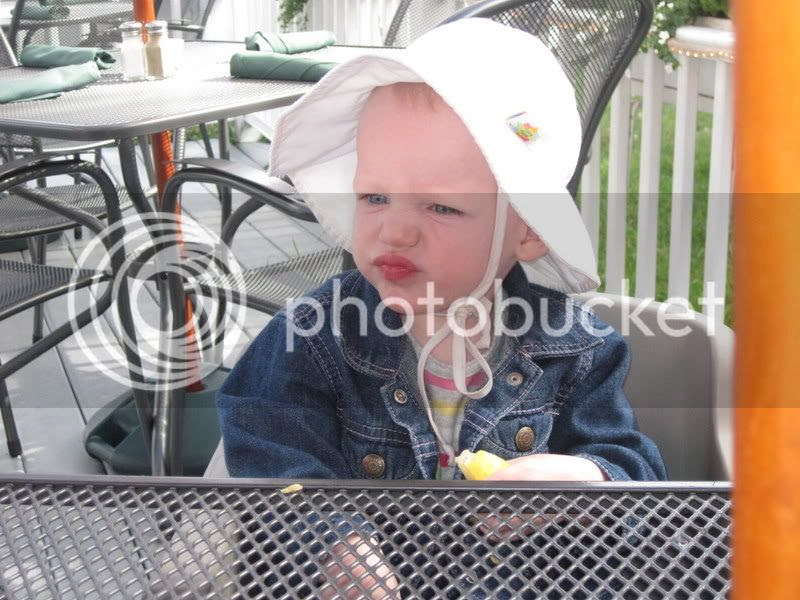 (Let me explain the life list: Jack has a habit of saying things like, “Mom, I’d like to ride in a blimp some day,” and I always reply along the lines of, “Yeah, that would be fun, Jack. Maybe someday we can!” Recently I started saying, “Let’s add it to the list!” But we don’t call it a “life list” or anything. So now we have fun listing all the things we’d like to do someday, and if we’ve done it already, we say, “CHECK!” And nothing is too trivial to be added to the list. Example of checked items: Swimming in a pool. Riding a scooter. Riding in a motorboat.)

I am going to post this even though it’s terrible because I need to feel like I’ve accomplished something during Jack’s preschool time. We’re in the middle of a heat wave, and the heat’s making me feel anxious and distracted like I did when I was post-partum with Nora. Or as though I’ve had six cups of coffee. It’s quite unpleasant.
Posted by Dr. Maureen at 11:33 AM 4 comments: