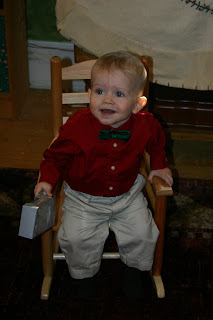 Jack received from Santa two small wind-up toys, a Clementine, a banana, a hand-me-down activity table, and a rocking chair. Jack received from his grandparents 6 pairs of pajamas, some spring-activated cars, a toy train that goes around and around, a toy tractor, some books, some puzzles, and everything on page 37 of the LL Bean catalogue. That's the page with all the Radio Flyer stuff, in case you are unaware. The kid got a little riding scooter thing, an off-roading wagon, and a tricycle so big he won't be able to ride for a good two years! But he was thrilled, and the wagon is going to come in handy come spring, so God bless grandparents. Hey, if you can't spoil your grandson, who can you spoil, right?

Our New Year's was good too, at least according to my own definition of a good New Year's, which is to say, we watched a movie and went to bed early. New Year's Eve doesn't really do much for me. Any time I've ever tried to have an elaborate good time on New Year's Eve, all I ever got was a huge letdown. I think it's just that there is far, far too much expectation built into New Year's Eve. It's not OK to just have a party, you have to have The Best Party Ever. Neither can you just go out for a few drinks, as the bars are all packed to the rafters and charge insane amounts of money just for the privilege of entering their dark, stuffy, smoky rooms. So after several years of buying into the hype, I finally gave up and decided that, for me, New Year's Eve would be a night to hang out, eat chocolate, and watch movies. I haven't been let down yet.

Granted, I always made it to at least midnight until we had Jack, but now, sleep beckons. In fact, sleep beckoned while I was still enjoying the movie, and although I did not go to bed until 10:30, I went to sleep at 9:00 or so. This tendency of mine to fall asleep while watching TV completely boggles Andrew's mind. He can't fall asleep during any movie, not even one he's seen before. Me, I can fall asleep at the movie theater. Sitting upright. Holding my purse. I have skills.

I think it's from all the practice I had at falling asleep during lectures and seminars in college and grad school. Did I ever tell you about the time I fell asleep during a class containing only 6 people? And the lecture was taking place in the professor's lab? And we were all standing up?

As I said, our holidays were lovely. It's the time since the holidays that have proven to be less than ideal, what with all the vomiting. But today we are all recovered, eating dairy and everything, so things are looking up. And the roof is 3/4 done! And, as a special bonus surprise, the roofers informed us today that part of their services includes cleaning up the bulk of the shingle debris that rained into our attic coating everything we own with a layer of thick, black dust, a side effect we were not prepared for. But since we thought we'd have to clean it up ourselves, learning that will be spared the worst of that job makes us better able to cope with the fact that we have to keep the Christmas decorations up for at least another week until we can clean off the storage boxes. And let me tell you, I am quite, quite ready to be rid of the Christmas decorations. I'm all for carrying out the Christmas season to its full conclusion, but today is the Epiphany and I want the tree GONE.

I think that's all I have for tonight. Coming soon: Tales Of A Delayed Separation Anxiety Stage In Which Jack Requires All-Mama-All-The-Time And Also Has Discovered Whining. Ah, whining. The negotiating technique of toddlers everywhere.
Posted by Dr. Maureen at 8:01 PM

Email ThisBlogThis!Share to TwitterShare to FacebookShare to Pinterest
Labels: Family, Jack, Me

I thought I had you beat in the falling asleep arena- I once fell asleep in a nightclub, where there was awful pounding techno music and slimy drunk men on either side of me and smoke and spilled drinks and tighty pointy uncomfortable shoes- until I got to the part where you fell asleep standing up. THAT takes talent.

CUTE pic of the boy!

Such a cute pic!! Ditto on New Year's Eve. We had friends over and did make-your-own pizza with the kids, played cards, watched a little TV, then all conked out at 11:55. Which is probably more lame than 10:00 because we just couldn't make it another five minutes.